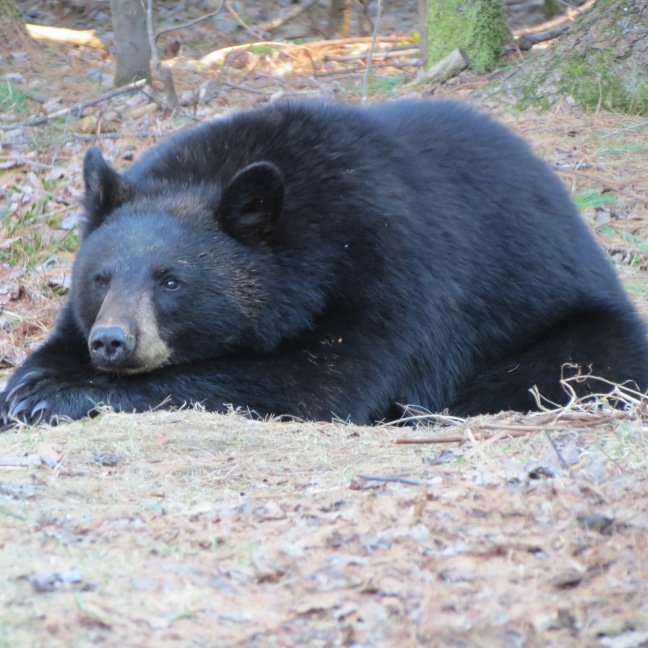 Ursus americanus is the smallest of the three species of bears found in North America and the most reclusive. In Maine black bears although rarely encountered, often provoke irrational fear. Terrifying images of snarling black bears with bloody jaws poised for attack appear on the covers of hunting magazines and over the Internet, while thousands of children hug cuddly teddy bears. These extremes in attitude and behavior suggest that the bear embodies the Spirit of the Wilderness in both its most frightening and comforting aspects. But what do we really know about black bears as a mammalian species?

Paleontology teaches us that this shy denizen of the forest co – evolved into its present form on this continent 500,000 years ago with huge meat eating predators like the 1500 lb short faced bear and the Dire wolf which are now extinct. Black bears are native to this continent and are found nowhere else. To adapt and survive as prey animals black bears needed forest cover and learned to flee from the first sign of danger by hiding in thick brush or by climbing trees (the primary reason we rarely encounter them in the woods today). Before Europeans came to this country black bears could be found throughout the United States.

Today, because of extirpation and de –forestation black bears inhabit less than a half of their original range. Currently they are most commonly found in the northern parts of this country and in Canada where large tracts of arboreal woods still exist. Their dependence on mature forest for cover, protection, and for fall mast (food: beechnuts, acorns) is presently threatened in Maine because we continue to harvest beech and oaks before they are old enough to produce good crops of nuts. Maine has about 16 percent of mature nut producing forest left.

Although considered omnivores, black bears are 85 percent vegetarian; consuming tender green shoots, corms, roots, buds and flowers in early spring. Tasty beetles, grubs, ants, and larva come next providing the bulk of bear protein. It isn’t until the berry crops appear in early summer that black bears begin to gain weight. Without an adequate fall mast of high caloric acorns, beechnuts (in northern Maine the only nut crop) black bears won’t gain enough weight to survive hibernation/torpor. Of all the possible foods a bear might eat only five percent of a bear’s diet consists of fish, carrion, or the occasional fawn/young moose.

After emerging from their dens in April it takes bears about two/three weeks for their metabolism to return to normal. By May bears are hungry and may be driven (instinct overrides caution) into people’s backyards to eat birdseed and unsecured garbage if natural foods aren’t available. Wandering young sub- adult males that are also searching for new territories are the greatest offenders. Removing birdfeeders and securing garbage can easily remedy this conflict.

Mothers with cubs emerge last in the spring and stay close to the den while the cubs (from one to three) continue to practice their climbing skills. Mothers teach their small (6-10 LB) cubs to tree themselves at the first sign of danger. As the season progresses the mother will leave her young hidden safely in the trees to forage on her own or when she visits a bait site later that summer.

Contrary to popular belief, it would be difficult to get between a mother and her cubs because at the first sign of danger she trees the cubs and runs away (however, grizzly bears and polar bears may attack if they believe their cubs are threatened). In Maine females breed in June and July and practice delayed implantation which means that the blastocyst floats freely in uterus and will not develop until late fall after the mother enters the den. If the female hasn’t put on enough fat she will abort. Cubs are born in January weighing about 12 ounces, and mother is awake and alert responding to each cub’s needs. Cubs’ blue eyes open at about four weeks and they begin to climb around the den shortly thereafter. Black bear milk is richer than that of any mammal in North America and the cubs will suckle well into their second year. First year cubs will den with mother in the fall (unless the mother has been shot) and family break –up occurs the following spring (early June in Maine) when the female goes into estrus. This long period of childhood/adolescence – 17 to 19 months is needed so that black bears can teach their young the skills they need to survive. Although females maintain home ranges of about 5-6 square miles (that they will share with their daughters) they will travel up to 50 miles out of their home territories to show the cubs where to find berries and nuts.

Black Bears have been prey animals for a long time and are understandably very NERVOUS around humans avoiding them whenever possible. All are very much afraid of other bears until they recognize them as kin. Females with cubs are particularly afraid of males who will sometimes kill a cub in order to bring a female back into estrus. Not much is known about adult male bears beyond the fact that they leave their mother’s territory as sub adults in their second or third year, appear to have very large/flexible ranges and have exceptional navigational abilities.

Black bears have a very large brain in relationship to their body size and scientific studies indicate that these animals are highly intelligent and surpass chimps in some learning abilities. Black bears have also been observed using tools. What bears do with body fluids during what can be a six to seven month “hibernation” is a mystery. They do not defecate or urinate during torpor (unless a female is birthing cubs) and they do not lose muscle tissue.

Without Minnesota’s bear biologist Lynn Roger’s groundbreaking “trust based research” which includes but is not limited to telemetry, videos and den cams we wouldn’t know that we could radio collar bears without tranquilizers, or that we could develop relationships with some bears in order to learn about bear behavior from observing individuals and kinship groups in the wild. For more than 30 years Lynn and his students and literally hundreds of participants have been collecting and analyzing data in the field by observing bears as they forage, interact, mate, rest etc. With trust based research the goal is to have the black bears become comfortable enough with humans to ignore them while the bears are being observed in their natural habitat. Ironically, the most difficult part of this discipline is getting a bear to tolerate human presence. Most bears are simply too shy. If bears were as dangerous as we are told they are by the state agencies like Maine Department of Inland Fisheries & Wildlife (MDIF&W) trust based research simply could not have been done for all these years without incident. In Maine the MDIF&W does not practice a methodology that includes direct interaction with black bears. Why? The notion of developing individual relationships with bears undermines the “official” MDIF&W position that black bears are dangerous predators that must be killed in order to control their numbers.

We have a three – month long hunting season in Maine. We are the only state in this country that utilizes steel traps to hunt bears. Bears have been known to gnaw off their paws to get free. The use of hounds outfitted with sophisticated GPS units violates traditional hunting ethics, as does the practice of bear baiting which only began in the eighties. What kind of sportsmanship is involved with all three practices when a bear becomes the unwilling victim to those who simply stand there and shoot a trapped bear, a treed bear, or a bear with his head in a can? Worse, as any skilled field researcher will attest to, it is almost impossible to sex a bear before shooting it. What this means practically is that almost as many female bears are shot in this state as males. If those females have first year cubs they will die a death of slow starvation, or be killed by other omnivores. In the last ten years Maine has voted twice to defeat a bill that would end the above hunting practices which would encourage hunters to hunt black bears in a more traditional manner as they do in other states.

Ursus americanus has been in its present form for 500,000 years, 300,000 years before humans inhabited the earth. Bears are literally our Elders. It seems ironic to me that we need to “manage” and “control” these animals when black bears thrived on this continent without human intervention for millenium. I am also dismayed because humans continue to ignore a chilling fact: it is the exploding human population that is devouring earth’s resources at an unprecedented level. Animal populations aren’t the problem, we are.

Indigenous peoples had deep respect for the black bear. Many eastern and western tribes believed that the bear was the “Owner of the Animals” and the most powerful plant healer of all. Acquiring black bear “medicine” involved complex rituals that included hunting “Grandfather” bear who was also believed to sacrifice himself to feed the People. Perhaps we have something to learn from the way these elusive denizens of the forest conduct themselves? If bears ruled the world we would have no wars.

The chances of being killed by a black bear are about a million to one. An important question to ask is why so few of these wild bears retaliate when we have treated them with such cruelty? One obvious answer is that black bears are reclusive prey animals that want to co –exist with humans in peace if only we would let them.

3 thoughts on “The Elusive Black Bear : A Natural History”