Today is the first full moon of the growing season, occurring just after the vernal equinox. The sky is deep blue and blustery winds obliterate the mourning dove’s call while my pentatonic chimes ring on. A solitary turkey vulture soars through the firmament attesting to the accuracy of the astronomical calendar and the pattern of the changing seasons: spring is on the wing. Native peoples think that vultures are a bird of omens; the sight of one is eagerly anticipated because it is believed that s/he ushers in warm winds, rising temperatures, and spring rains. Amazingly, Indigenous myth and story mirrors Nature’s temperament because these birds are harbingers of spring. And spring this year brings my grandsons’ home.

I haven’t seen my grandchildren together for about 16 months. Both were whisked away by the armed services. But a year ago last Christmas Drew and Cameron gave me an amaryllis bulb named Desire – the best Christmas present ever! I remember the magical December afternoon I spent at home here with these young men as we talked and laughed and told stories. I experienced such a profound joy in their presence…

After they left that evening I reflected on the name Desire. To desire is to need, to long, or to yearn for something or someone. It was such a perfect word to describe what this bulb personified for me with respect to my grandchildren. The bulb symbolized my deep love for these adult grandsons; it also embodied my desire and deep longing to be with them…

For the next couple of months I watched Desire’s two sturdy stalks grow tall and strong and when she bloomed I was awestruck by the passion of her bittersweet blush. Oh, how I loved her! The huge bouquet of flaming orange blossoms took my breath away – she was a sunrise on fire…

After Desire finished blooming I cared for the bulb and her emerald leaves throughout the summer, then put her in a dark closet to rest until the beginning of December.

I retrieved the bulb and buried the bottom of Desire in a new pot after noting that she had a new bulblet growing out of her bulb. Desire was healthy and already reproducing I thought happily. Strangely, after re-potting her she just sat there for a number of weeks with no sign of growth even though I showered my attention on her. At first I was baffled by amaryllis’s behavior but gradually the beautiful fat green bulb helped me understand. Desire apparently knew something I did not. She told me that because neither of my grandchildren would be here for Christmas I needed to put her bulb back to sleep!

Many years ago I learned to listen to plants. They spoke to me because I loved them. Plants don’t normally use words, they work through my body using all my senses to communicate with me, or they speak through dream images.

Acknowledging my keen disappointment with regard to my grandsons’ coming absence, I dutifully made peace with myself, and returned the bulb to her dark closet. As Desire predicted neither grandson returned home for Christmas.

Throughout the winter I routinely checked the bulb but she lay dormant. In late February I spoke with Cameron. He told me that he would be home on leave sometime in April. Sometime after our conversation I checked Desire and was delighted to see a tiny tip of a bud peeking out of the bulb; she knew. I decided to wait a little longer before planting her; I hoped for another bud.

On the Vernal Equinox (3/20/16) I spoke with Cameron for a second time; he gave me the precise dates in April when I could expect him for a visit. Then he told me that he believed that his brother (who was leaving the Marines after five long years and was now only 22 years old) would also be home by then – for good! Just the thought of seeing both of my grandchildren in the flesh started my heart pounding. I had been forcibly separated from these boys during their childhood years, so at seventy these two young men were the stuff out of which my dreams were spun. I loved them – fiercely.

After our second conversation I checked on the bulb again. I was astonished! In three weeks Desire had sprouted two stalks with buds, each un-naturally whitened and starving for light. Apologizing profusely to my beautiful bulb, I tenderly re-potted her and staked the stalks, one of which was more than two feet high and just about ready to break under it’s own weight. I shuddered to think what damage one more night in that closet would have wrought. 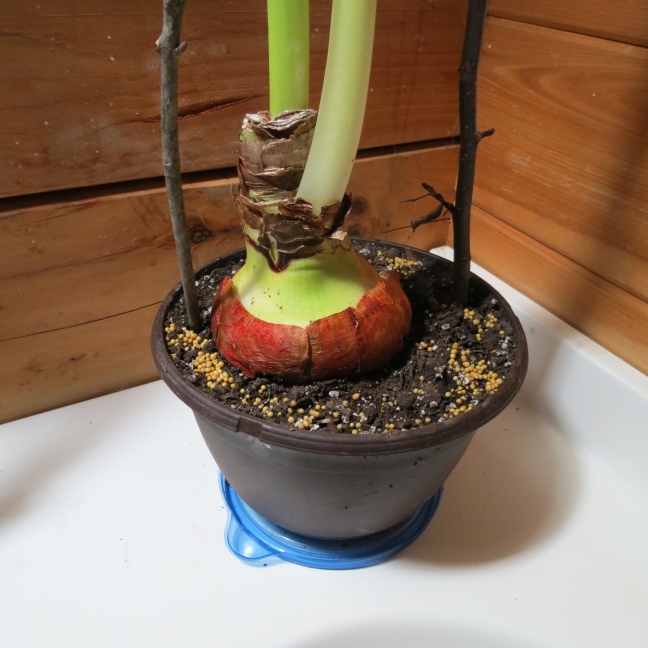 In the past three days I have watched the two budded stalks turning green, reaching towards the warming sun, the waxing/full moon and rising waters. I could, of course, simply say the bulb needed a longer night to begin to bud, but I believe there’s more to this story.

I think these buds on stilts represent my grandchildren coming into my life again. I don’t think that it is coincidence that the amaryllis bulb began to shoot up when it did. I think that Desire knew I loved her so much that she chose to align her growth with my grandchildren and me.

I also think that on some level that I am the bulb, and that my two grandchildren are my buds. I am flesh of their flesh. Desire decided to become a container for one grandmother and her two grandchildren grounding our  connection in relationship through a bulb, binding us together until we could meet again.

Nature demonstrates that timing is critical to every growth cycle. If Desire can sprout stalks in even in darkness when the time is right, and then produce buds/flowers in the light, (and repeat the process on a cyclic basis) then my relationship with these beloved children can grow, bud, and flower too, deepening with each turn on the spiral. Unexpectedly, I have a clear image of Desire’s tiny bulb still attached to its source and wonder what mysterious new life the future might bring.

POSTSCRIPT:   During the night of 4/11 the two foot stalk snapped and the flowers fell over. The moment I glimpsed the invisible slaughter I knew that I would not be seeing my grandsons and sure enough a few days later I learned that Cam’s leave had been overshadowed by the military agenda and that my second grandson would not be home until June.