A couple of days ago I went on a hike with a friend who took me to see some petroglyphs. These pictures that are pecked into stone were created by the Pueblo people that settled in the surrounding river valley along the Chama River probably a few hundred years ago. Perhaps some figures were pecked earlier and others created later after the Spanish Invasion and the Indian wars?

Unfortunately anyone that searches for petroglyphs will see that some people can’t seem to view these mysterious images without adding their own names, or in some cases shooting at the rocks or otherwise defacing the surfaces.

At the first rock very close to the river there was a strange creature that my friend thought might be a mole. I thought it might be a dead antlered animal with humans dancing under it. After my initial impressions I attempted to identify some of the figures without success unless I included the two mountains, the sun and the moon, and large 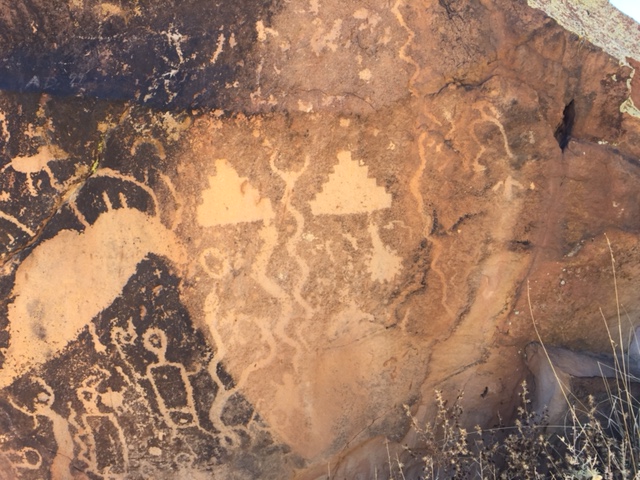 serpents into the mix. Both the horned serpent and other snakes were etched into the stone. I felt confusion rising. This rock was probably telling a story, but I couldn’t understand what was being said. I didn’t know the language.

After pausing for a while at this site discussing possible meanings we began to climb up the steep rubble of nearby hills and the further up we traveled the more beautiful the landscape beneath us appeared. The hills beneath us became part of an undulating fabric that draped itself over the land like a soft blanket. I struggled mightily to keep a foothold on the rocky ground while my adventurous and skilled climbing friend seemed to move effortlessly in front of me. I was afraid that I would not make it to the second petroglyph at all! 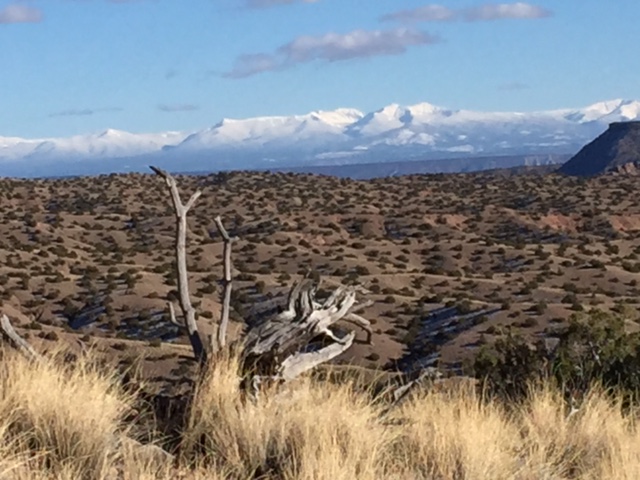 Eventually, we reached the summit of the last peak, and after I gasped at the sight of the startlingly white snow – covered Rocky Mountains to the northeast, we began a slippery descent into a small valley in between the knolls. Here was a second lichen covered rock with the same dark patina and another set of petroglyphs. This stone seemed to be in a straight line with that of the river rock, now so far below us. I don’t think it was an accident that beyond the second petroglyph rock the sky opened into a magnificent valley that led to Copper Canyon many miles away.

If possible this second set of petroglyph images was more baffling than the first! It was dominated by a large filled in circle, strange lines and stranger figures one of which (a scorpion like animal?) I thought I recognized from the other site. I looked for other similarities and found few beyond serpents. I was startled to note the obvious Christian crosses. Although they appeared to have been pecked at the same time I suspected that the crosses had been added after the Pueblo people had accepted Christianity as their religion. I re-called from prior petroglyph hunting in Arizona that sometimes one set of images or “story” was superimposed over another. Both of these rocks faced east although this second one seemed more open to the sky.

The wind was fierce and relentless and I welcomed our descent into the valley; the sun was low on the horizon and it was getting colder.

I arrived home exhilarated with my head full of unanswered questions. I was ever so grateful to my friend for taking me on this particular hike. I had been hooked again by the “petroglyph god” and couldn’t wait to peruse the books that she had so thoughtfully brought me hoping to answer some of the questions about what I had seen. And of course, most of all, I hoped for another such experience. Soon!