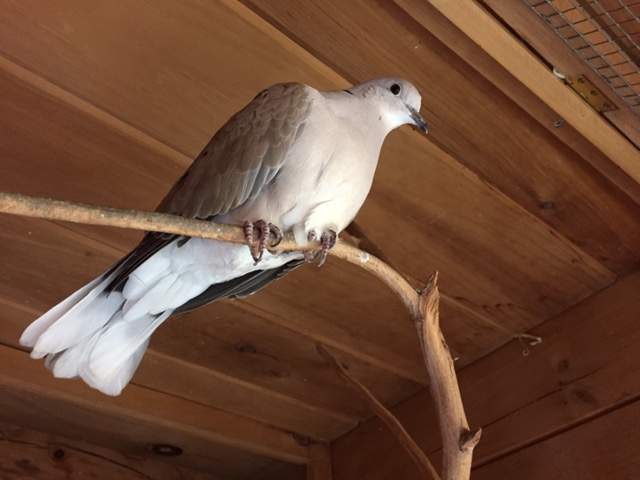 (my dove Lily b sitting on his perch)

For the past few weeks I have had Great Horned owls calling around the house, for the first time ever. For many years I have seen them soaring low through the hemlocks on a nearby logging road after being mobbed by crows, but last winter all those old hemlocks were cut down. Today there is a hole in the sky where those elders once stood. Where did the owls go I wondered the first time I witnessed the devastating loss of these most gracious of evergreens that provided protection and food for so many woodland birds and animals.

Now, I think, they moved here.

Most amazing to me is that Lily b my dove is returning these evening calls by cooing back! This blending of voices between predator and prey captivates me. I know from living with Lily b for 25 years that he normally reacts to the presence of avian predators with stony silence.

Why is Lily b having conversations with these birds? The most rational explanation is that Lily b answers because he feels like it and knows he is safe in the house. Yet I am not satisfied; it feels like something else is going on here (He never cooed in response to the barred owls that called each night for years when they inhabited this patch of woods).

I have a long history with Great Horned owls that stretches back to my childhood, one that includes my relationship with my mother who often painted them. As a child I was frightened by these images of the Great Horned owl, probably because I was afraid of my mother.

During the span of my adult life I have rarely heard this owl hoot in the forest up until this fall, when these birds congregated around the house the night before a bear was shot in mid September, and then on the eve of my birthday when they once again engaged in animated conversation that lasted almost an hour.

I experienced gut level fear the first time this happened even as Lily cooed back and forth with the owls. The bear in question survived being shot, so my initial fearful reaction to the hooting was wrong…The night before my birthday it was impossible for me to ignore the possibility that my mother, in the form of an owl she once loved, had come to visit me. I felt confusion rising while listening to Lily b converse with the owls a second time because the symphony was quite beautiful.

Lily b is a telepathic bird who regularly comments on what I am thinking, and the fact that I was initially alarmed by the owl convocation while he was cooing in response might have been his way of telling me that in this case I had nothing to fear.

The longer I reflect upon this idea the more I think it might be true.

Now as the night closes in I listen to the owls calling back and forth and feel a strange sense of comfort.

What I appreciate the most is that the deep haunting hoots of these majestic birds evoke the mysteries of the forest and not old childhood fears.

I now understand that those great horned owls were a warning – I was about to make a terrible mistake. I thought I was moving to a safe place; I was NOT. And my BODY felt the threat.

Now whenever I hear a great horned owl I prepare for some kind of danger or crisis.

What interests me here in retrospect is that the great horned owl is associated with my mother who had no use for her daughter. During her life she drew great horned owls all the time.

After death people turn into other things (Ovid) and the g/h owl is somehow associated with my mother and is a threat to me so this field of influence is a negative one. Curiously, many Indigenous folk also fear the g/h owl associating it with death including the Lakota Sioux and many South American Indigenous peoples –  there is definitely a negative charge attached to this particular owl on a collective level. I had a friend who had one perch on her roof a few months after her mother’s death and I felt the chill…. not surprisingly this woman stopped speaking to me for two years and then told me “she forgave me” for what, I wondered. BUT the moment I heard the owl I KNEW betrayal was at hand.

2 thoughts on “The Dove and the Owl”