This unknown painter captures Earth Day for me. 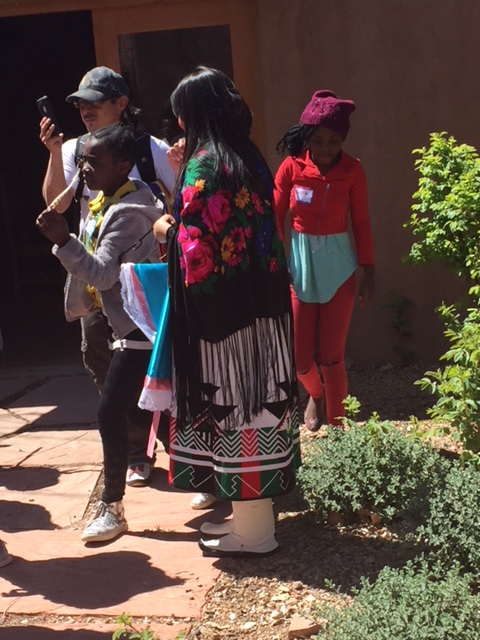 Young dancer after the ceremony

Woman on left making contact with the sky and earthing with her other hand… she may be holding Avanyu, Tewa serpent of the river(?) – I am fascinated by the large dog-like animal above her.

Iren and I at the river…. water women we are!

The seed circle – note the bowls of earth and water

Yesterday we attended The Tewa Seed Exchange at Los Luceros, a magnificent piece of lush irrigated land situated on the Rio Grande a place where many Indigenous peoples once lived and farmed. The orchards were stunning, magenta, deep rose, pale pink, and white clouds of fruit -tree blossoms drew in masses of bees from every direction. Standing under the trees to listen to this joyous buzz was pure honey-bee delight!

The seed ceremony was held outdoors in a circle and just as it began two red tailed hawks appeared out of the deep blue sky and circled over our heads – Messengers from the beyond, these birds have a habit of appearing at Indigenous ceremonies, a fact I have witnessed too many times to ignore. And what could be more important than a seed exchange between primarily Native peoples many of which had gathered seed from plants they had grown the year before and brought them to exchange with their neighboring pueblos?

The appearance of the two hawks also held personal significance for me because I buried my brother’s ashes on Earth day and this seed ceremony occurred the day before. Every year around this day hawks appear as messengers reminding me that my little brother lives on through these raptors he so loved… a comforting thought though he has been dead for 46 years.

Before the actual ceremony the current docent spoke. I was distressed to hear so little about the Tewa speaking peoples we were there to honor. Instead the recent story of conquest and colonization took the usual precedence along with that of the recent history of the mansion located on the property (which had finally been taken over by the state).

However, when the actual ceremony began the Tewa women blessed the seeds and we were asked to enter the circle from the direction we came from with our individual offerings all of which were put into a communal container… We moved around the circle counter clockwise before pouring our seeds into the large beautifully woven Indian basket. A simple but moving gesture that united all that participated.

The week before I had spent time reflecting on what seed offering I would make. I had saved many wild seeds from last spring but because I wasn’t here last summer, hadn’t planted any. Then just a few days before the ceremony I discovered a “black sage garden” on Iren’s land that she hadn’t known was there! I knew then that I needed to offer the seeds of this black sage, not just because it is a powerful blessing herb, and one deeply meaningful to me, but because of my deep gratitude towards this woman. I have been privileged to stay in safety and comfort on her land for two winters, and to offer these seeds as a form of thanking her as well as an offering for the ceremony felt just right.

What I also liked was how the children were encouraged to participate in the ceremony bringing seeds for the communal basket. Seed gifts from the earth belong to the ancestors of the Tewa and are also the seeds of their children’s future…

The dancing came next. I am always struck anew by the individuality of the dances although meaning seems to seep through the sound of the drumming. The singers/ musicians came first and two of them carried orange lightening sticks to call down the rain as they chanted. Four young people came next, two boys and two girls dressed in elaborate rainbow regalia, the boys with spear – like projections topped by the deep orange parrot feathers that identified them as the summer people. The boys danced in a circle with the two maidens, each gender moving up and down in a rhythmic way. The two girls wore a circle of red on each cheek to signify purity. The boys wore white net leggings, plowed the earth with their spears, the girls held up their baskets. The sounds of the bells, rattles, and gourds pulled me into their story, one without a need for words…

Just after the ceremony ended we were told that the children would use the earth, the water, and the seeds that had been placed within the ceremonial circle to make mud seed balls that could be planted just as they were. What a wonderful idea! I have one sitting on the table waiting to be Earthed until I receive a message as to where it should go…

We then entered the building for the actual seed exchange – an unbelievable abundance of seeds were spread out on table after table. With so many to choose from it was hard for me to make choices. I chose seeds that I wanted to grow, herbs in pots, a few kernels of blue corn, some hardy flowers. I did not take more than I needed but even so, I will have plenty to share because if I have a garden it will be a small one…

Iren and I wandered down to the river to eat our lunch and when we returned a celebration was in full swing with lots of hot food, music, and dancing. The joy was contagious! David Garcia’s music has no parallel in these parts.

When we left we stopped to see some petroglyphs – there was one with an Indigenous woman holding one hand to the sky while earthing the other. This picture caught the spirit of the seed ceremony I had just witnessed in a pictorial way.

As a woman with northern Indigenous roots and a dedicated seed saver for most of my adult life I was so grateful to be able to participate in a communal tradition so dear to my heart.