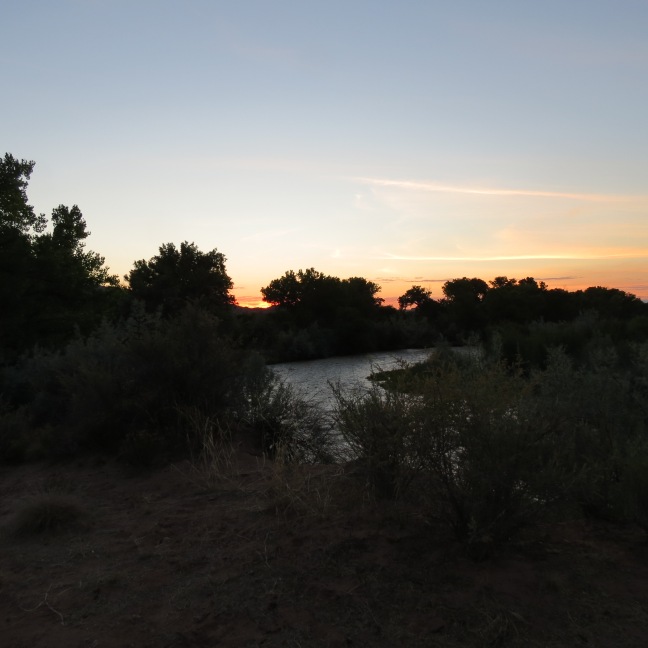 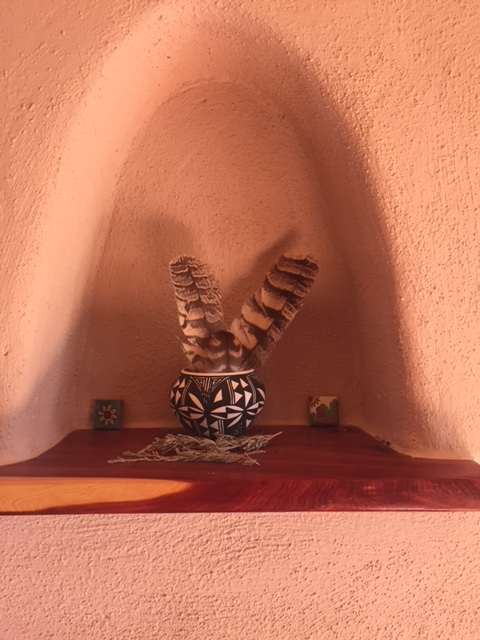 Nicho in the East

A ‘Nicho‘, is a three-dimensional or recessed area used to honor an important figure, saint, or loved one. Nichos originated as an adaptation of the Roman Catholic ‘retablo’, painting of a patron saint on wood or tin.

When I was a little girl my parents spent a year in Europe and my mother brought me home a small Greek Orthodox retablo of the Virgin and Child made of silver. It had two small arched doors with tiny nobs that opened onto an etched picture of the Madonna and Child. I placed the retablo on a table next to my bed where it remained throughout my childhood. I opened and closed ornate silvery doors frequently drawn in by something that at the time I couldn’t name. When I became an adult this small silver story moved from night table to table in each house I lived in for about 45 years.

The most amazing part of this childhood gift was that as far as I knew my mother had no idea that I had a relationship with Mary or her son. The eight year old child in me concluded that my mother must have magical powers! Even more curious was the fact that my mother, though she had married an ex-catholic, was very biased against Catholicism, so as I got older I became even more puzzled as to why she would choose such a gift for her daughter, especially one she didn’t like much.

When I moved into my log cabin in Maine, the very first object to be placed in the house was a retablo of Guadalupe, a Mexican Indian Goddess that belonged to the country people. She appeared to an Indian peasant in the 1500s at the site of an ancient Indigenous Earth goddess Tonsaztin. During the cold winter months, I festooned her with red lights. Although I was no longer associated with Christianity or the church I was still much taken by this figure because she was an Indigenous Mexican goddess and an Earth Mother.

Now I am living in Northern New Mexico and have just moved into a casita that has been constructed by a gifted Mexican builder named Mario. I do not own this house. It belongs to my neighbor. However, part of me belongs here. I chose the location, the colors of the walls, the Mexican tile floors and insisted that the house have many windows so that indoors and outdoors could merge as one undivided space. I also asked that Nichos be placed in each of the four directions. The adobe has simple lines and two portals or porches one on the east side that overlooks the majestic cottonwood trees I love so much.

Perhaps even more important, as the first mud bricks were laid, my dear friend Iren  embedded “sacred” (to me) objects in the walls while I was in Maine. She also placed sage in the center of the house. To acknowledge the powers of the Four Directions she chose an elk antler and a piece of chert for the North not knowing that I had named my log cabin in Maine “Elk House”. For the East and West (the good red road) I sent her treasured pieces of bear fur from my ursine friends to honor the black bears that had stolen my heart, and who lived around my house in Maine. The potshard she placed in the Southern wall acknowledged the ancient inhabitants that first belonged to this land. (The southern view from the house overlooks Poshuowingeh, an Anasazi ruin, a place I love and have visited countless times).

In preparation for this embedding Iren made a drawing of a squared circle and its four directions in her studio, When I arrived later in November she made a copy which I immediately placed on a wall where I could see it every day throughout a long and difficult winter. This drawing reminded me that the casita that was being built with my neighbor’s money began with me, and my clear intentions to inhabit a space that would be in harmony with the powers of this place. Iren and I called the casita “house of the bear.”

Winter dragged on, and as the construction continued I was rarely at the site because my neighbor had made it clear that the casita was his and that my suggestions were no longer welcome. I was told that the house would become part of the estate that would be left to his niece; this latter piece of information was no surprise since I already knew it. I had no claims on the casita, only my love for Red Willow river, Iren’s beloved land, and this small chimisa meadow which I had chosen as a building location because the Earth had indicated that I should.

Serious doubts crept in along with ongoing persisting illness that plagued me during the course of the winter. On the rare occasions that I did visit the construction site I experienced a peculiar numbing throughout my body. Had the connection I once felt to this small piece of Earth been delusional? … Every morning when I went to the river to watch the sunrise I would silently ask this question… I buried bear root. I made plans to return to Maine.

On the first day of May I was visiting the casita with my neighbor when I discovered an owl feather. I had been listening to owls all winter and knew that they lived in these cottonwoods. I also had what I would call an ongoing owl conversation with these great Horned owls that began in Maine last fall and followed me here. Finding the owl feather on this day, a day once revered by country folk/Indigenous peoples as a powerful turning point of the year seemed significant, and my neighbor brought it into the casita and placed it in the Nicho in the East. That same day, May Day, I also began to scatter wild seeds that I had collected the year before around on the red earth… This seeding went on all month with me tending to the care and watering, clearing up construction debris, garbage, trimming beloved chimisa bushes. (with me doing the work the owner has a professional gardener/landscaper who works for free).

For the first time I wondered if it would be possible to live here after all – to stop here for a time. The house and land might not belong to me except in a spiritual sense. What I felt was a renewed connection to Place and since I trust Nature’s nudges I went with it.

Now a month later I have moved into the casita. I don’t carry a lot of false hope. Money rules the world and I don’t have it. I could never buy this land even if it was an option. That I personally believe that we all belong to the Earth and no one owns it is a perspective that is foreign to most people and is certainly not lauded by the owner of this property.

However, with this much said, the day I moved in I felt the walls hugging me. I did belong here! The casita felt utterly familiar, comforting. Most important the structure exudes a sense of inner peace… something I have been longing for.

About a day later, Mario found a second great horned owl feather that I added to the one in the East Nicho. By now it was clear that Nature had decreed that bears belong in the West, but owls must embody the powers of East. As if to reinforce this notion, the second night I slept here I heard a great horned owl hoot just outside my window….

The first task I undertook was filling the rest of the Nichos. The owl feathers face East. A vase holds precious potsherds in the South. In the West I have placed a picture of a bear I once knew whose name was Hope. Iren’s photo of the squared circle and sacred placing of the objects sits behind a black Mexican luminary… to light up the night. In the North I have placed a piece of luminous black chert and an antler that Iren gave me. There is also a small wreath I made with cypress pine cones that symbolizes Wholeness inside the house and out. I am setting clear and vivid intentions. I am aligning myself with the Powers of Nature to hold and to heal…

Some say that two is the number of manifestation…Iren began this process of orienting the casita to Nature and I am finishing it. The casita has been blessed by river water and smudged with sage by me.

Will I be stopping here awhile? I don’t know. But I do my best to be as present as I can be to each moment opening myself to the astounding beauty that surrounds me. Nature aslo invites me  to do so with each new seedling that sprouts tiny green wings.

However, Everything Changes and the future remains veiled.

The light in this house (thanks to my placement of windows) is astonishingly beautiful with its warm sandy walls, wood ceilings, and rust colored Mexican tile. The east portal that looks out on the Matriarchs of the Bosque is a source of ongoing joy, a place to end each day, eating my dinner to the fluttering sounds of heart shaped leaves of the cottonwoods and hummingbirds that twitter and cheep as they dive into the feeders for a nightcap! Each morning I walk to the river winding down through the wild grasses of the old pasture, cross the acequia onto the prickly pear path, listening for the roar of this much beloved churning serpentine ribbon while scanning for birds. When I sit down on Iren’s little bench I look to the sky… Sunrise is a time to give thanks for the gift of each day…