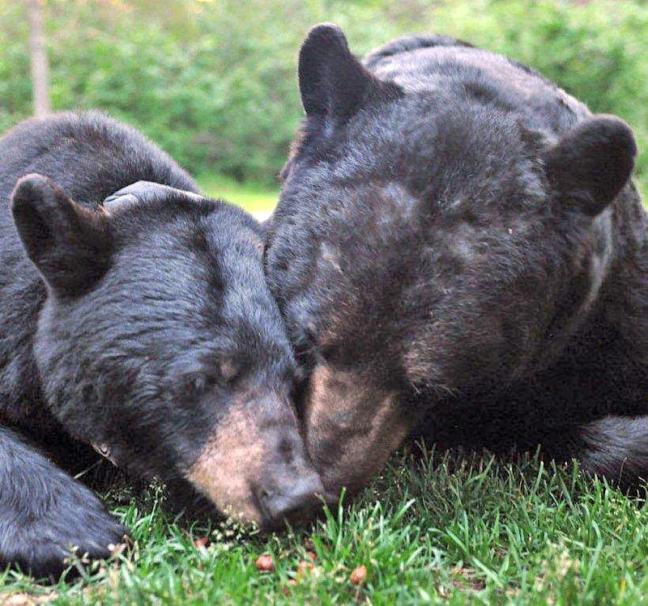 Photo credit: North American Bear Center – these are two of Lynn’ study bears – bears who clearly love one another.

Lynn Rogers has been a mentor and a friend, a man with genuine humility, a brilliant and innovative Bear Biologist whose groundbreaking work is changing the way some people see the Black Bear.

I have written about him elsewhere on this blog but until this morning did not have this information about his professional life. He is truly a remarkable man.

All the credit for the following information belongs to Lynn, who posted it on his daily update. He writes:”

“The last couple months I’ve been catching up with people who began studies about the same time I did.

Today, it was Dr. Victor Van Ballenberghe. I met him in 1969 when we were graduate students together in the U of MN Department of Ecology and Behavioral Biology. He had just wound up a moose study for his masters and was beginning a wolf study for his Ph.D. We ended up sharing a cabin in the Northwoods and helping each other catch wolves and bears to radio collar. We both have fond memories of those beginnings. Then he graduated and we lost touch for some 45 years. He made moose his specialty. I found out today that we each have followed the career of the other over the decades and saw many parallels. What we learned in the Ecology and Behavioral Biology Department under Dr. Frank McKinney sank in for both of us. We each went beyond the usual studies of how many can be killed sustainably during hunting season and looked at these animals as individuals in a social order with sons and daughters to nurture and food problems to solve. We each focused on ecology and behavior, spending thousands of hours close-up with our subjects. What makes Vic stand out is that he does what is right even if it is politically wrong. He is the main person standing up against the extreme wolf and bear killing that is taking place in Alaska in an unfounded and largely unsuccessful effort to bolster moose and caribou numbers. He is a fine speaker who tells it how it is, including mistakes he has made. He is willing to help with the moose exhibit Judy McClure and I are making for the Bear Center. I am glad to have his renowned name associated with the Bear Center.

A few weeks ago, I caught up with Dr. John Ozoga, a deer biologist who was a beginning biologist for the Michigan Department of Conservation’s Cusino Wildlife Research Station when I got my start there as a student intern. He did over 50 years of deer research while I did the same with bears—both the longest in our fields. He is now helping us with the deer exhibit that Judy and I are creating for the Bear Center, and I am again glad to have his renowned name associated with it.

A few weeks ago, I had some good talks with Dr. Michael W. Fox who I’ve never met although he has helped me out as much as he could in the past. He is a renowned veterinarian and animal behaviorist who writes national blogs and is the former vice president of the U. S. Humane Society. His writing flows from a fertile mind with broad knowledge.

Over the 50 years I have known Wolfman Dr. L. David Mech we have kept in contact. He began his Minnesota wolf study in 1968, the year before I began my Minnesota bear study. We helped each other with captures, and we co-authored several papers together. He is in his 80’s and still plugging away. He founded the International Wolf Center, and we each work together for the betterment of both the two (wolf and bear) centers.

A couple months ago, I called my old employee Pat Beringer, now a wildlife manager in Wisconsin, and thanked him for his efforts to surprise me with a Distinguished Science Award nearly 30 years ago. I had no idea at the time (1991) and recently discovered the paperwork for it. I also thanked Dr. John Probst for his part in that.

I’m very glad I caught up with my old professor Dr. Albert W. Erickson a few years back, shortly before he died. He was key to getting me started on my career, bringing me to Minnesota as his graduate student to do Minnesota’s first black bear field study.

Another person I caught up with in recent years was Dr. Robert Brander, who recommended that the USFS create a field research scientist position to conduct studies similar to my bear studies and hire me to the position if possible. It was possible, and it led to my 17 years as a research scientist with the USFS’s North Central Forest Experiment Station. Dr. Mech backed that idea as it hatched.

Finally, ever since DNR Commissioner Allen Garber stepped in with his quiet strength to overcome opposition and set me on a track to everything that has happened since 1999, we have gotten together periodically to reminisce and rejoice that he was in a position to see and understand and use his power as he did.

Beyond these people, there were so many who helped in many ways. The stories are fun to tell—how things looked dark and a shining savior stepped in to clear the way or provide funding for so many things right up to the present. The North American Bear Center is a shining example. I thank them for all they did, and I thank you for all you have done as part of that.”