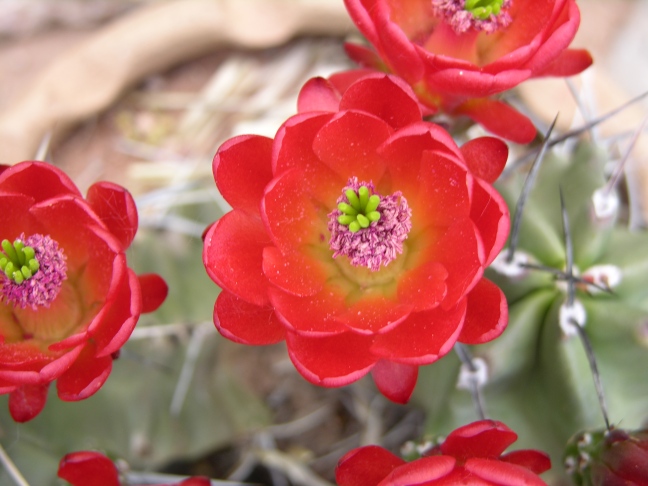 Author capturing her cactus (photo Iren Schio) and a picture of my Claret cactus when she bloomed.

A story of Reclamation

One beautiful blue and gold afternoon late last fall Iren and I wandered through a nearby arroyo. As always we were always on the look out for whatever might capture our attention. Both of us were desert “beachcombers” by nature, each with her unique preferences.

On a steep hillside amidst some scree I glimpsed an uprooted cactus clinging, somewhat desperately I thought, to the slope. Almost all of its roots were exposed. How had it gotten there I wondered. It appeared to have tumbled down the mountain, or perhaps it had been pushed by water or trampled on by cattle.

I recognized the cactus immediately because even in its desiccated state I could identify the species; it was a Claret cup cactus, a native to the area, and a wild hedgehog that was very dear to my heart.

I had first seen one of these beautiful cactus blooming at Iren’s the June before last. The color of flame, I thought it was a summer solstice vision.

The following spring I planted my own claret cactus in the ground after I moved into the casita and after it bloomed for a few days in June some creature feasted on the startling deep orange fruit. Eventually one of my gophers munched down its roots. One morning late that summer my spiny friend simply toppled over dead. I was bereft… Out of all of my wild dug cactus this one was my favorite.

In it’s present state the cactus in front of me was shriveled almost beyond recognition. The poor plant had a steel gray cast to it. Neither Iren or I held out much hope for life but I couldn’t resist bringing it home anyway.

I have been a plant gatherer all my life, paying particular attention to flowers, herbs and plants that are native to a particular place. Around my house in Maine I have transplanted so many herbs and wildflowers over a period of thirty plus years that my land is literally awash in wild species from other micro-climates in this area.

Returning to the casita with my thorny friend I decided to plant it in a pot next to the other cacti that had survived the attentions of my wily gopher, teaching me in the process that it was useless to plant anything in that dirt without an underlying screen to protect its roots. Every wild cactus I had was now living in a pot.

That first night I left the cactus roots in water; the next morning I placed it lovingly in a frog pot and left it in a protected place by the southern wall where it remained all winter. Every single day when I came out the door I gazed at that very dead looking cactus, willing it to come back to life. I never gave up hoping…

Early in March I noticed that the cactus seemed to be absorbing water because it’s wrinkles were starting to smooth out. Next the cactus took on a pale greenish cast, and this was when I realized that my rescue had been successful – this cactus was going to live!

However, nothing prepared me for what happened in April. One morning I discovered a small reddish bump on my cactus. My spiny friend was actually going to bloom!

Soon there were seven bumps that matured into seven tightly closed teardrop blossoms.

I knew from reading that this hedgehog cactus could grow in clumps as much as 3-4 feet across, and that the brilliant blood orange or scarlet flowers – depending on the soil type – often covered the entire plant. Someday, I must witness a whole colony of these cacti. If anyone knows of one in our area, please let me know!

Even though I had already returned to the North County before the cactus flowers actually opened I saw pictures of mine. I didn’t mind not seeing them – these flowers were emblazoned in my mind and besides this reclamation story has such a happy ending!

One thought on “The Claret Cactus – Reclamation”