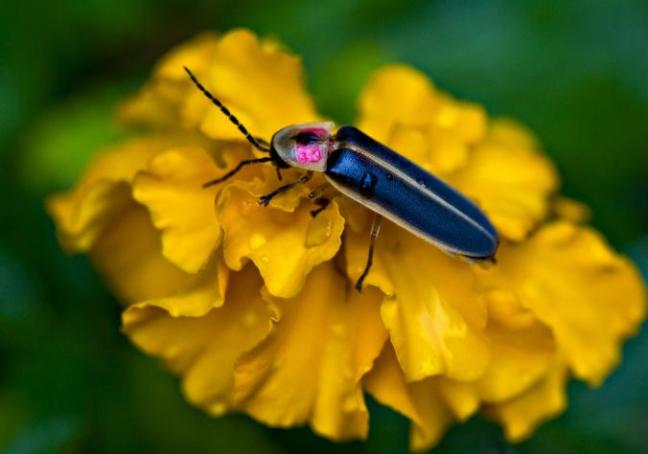 My friend Iren from Abiquiu just wrote me that on the full moon some fireflies were lighting up the night down by the river’s edge. I was so happy to hear that news because last summer those diminutive lanterns were absent around the casita even though it is situated close to the river.

In my Maine backyard this summer some green and gold lights continue to flash their signals just before dark lasting into the night. I find myself looking for patterns, and counting firefly numbers obsessively, almost against my will, remembering what was…

When I first moved to the mountains 30 plus years ago I camped in the field next to the brook and couldn’t fall sleep at night, struck by “lightening bug” wonder. It seemed as if the field itself was on fire with thousands of these magical lights that blinked as they skimmed the tall grasses, glowing like emerald jewels from the ground. When my camp was built it was awash in firefly light, and each year I anxiously awaited magical, mystical summer nights when my nocturnal friends would appear. The first evening or so after they arrived, I couldn’t resist capturing a few to keep in a ventilated jar overnight, just as I had done as a child.

When it started I thought it was my imagination. Maybe it was a bad year for fireflies I rationalized, the first summer I noted the absence of an abundance of lights hovering over the field. But I was wrong. Year after year, journal entries confirmed my worst fears. The fireflies were disappearing and there was nothing I could do about it.

Even now that I know that our insects are experiencing a holocaust there is a child in me that cannot accept that fireflies are leaving us and that its just a matter of time before these insects disappear for good. I recently read that tourists flock to places where (synchronized) fireflies are still abundant.

The grief I feel is visceral.

Fireflies are winged beetles. When a chemical called luciferin inside their abdomen/tail combines with oxygen, calcium and adenosine triphosphate a chemical reaction occurs that results in bioluminescence. This ‘cool’ light is the most efficient in the world because almost 100 percent of the energy used is emitted as light and not heat.

A similar group of organisms are glowworms. The term “glowworm” can refer to firefly larva or wingless adult female fireflies—some of which are not in the firefly family Lampyridae. Both glowworms and fireflies are bioluminescent.

Each species uses it own pattern of lightening flashes to attract a mate, and most fascinating is that some fireflies synchronize their yellow, pale red, green, or orange lights. Several studies have shown that female fireflies choose mates depending upon specific male flash pattern characteristics. Higher male flash rates, as well as increased flash intensity, have been shown to be more attractive to females in two different firefly species.

Many would be predators are repelled by firefly blood that contains defensive steroids which apparently taste awful!

Some firefly larvae can emit light from underground, and in some species the eggs glow. The underground-dwelling larvae of the lightning bug are carnivorous and feast on slimy slugs, worms and snails. Others live in the water, have gills and eat aquatic snails before coming ashore. Most adult fireflies feast on pollen and nectar.

Three main factors for firefly disappearance are habitat loss (when fields are paved over fireflies don’t migrate; they simply disappear – this fact may suggest that these insects may be tied to a particular place), logging, toxic chemicals like DEET (which tend to linger in aquatic environments where many fireflies start their lives), and light pollution.

Most species of fireflies thrive as larvae in rotting wood and forest litter at the margins of ponds and streams. And as they grow, they more or less stay where they were born. Some species are more aquatic than others, and a few are found in more arid areas—but most are found in fields, forests and marshes. Their environment of choice is warm, humid and near standing water of some kind—ponds, streams and rivers, or even shallow depressions that retain water longer than the surrounding ground.

As previously mentioned both male and female fireflies use their flashing lights to communicate. All species speak a language of light.

Human induced artificial light pollution (including those cute little solar lights) may interrupt firefly flash patterns. Scientists have observed that synchronous fireflies get out of sync for a few minutes after a car’s headlights pass. Light from homes, cars, stores, and streetlights may make it difficult for fireflies to signal each other during mating—meaning fewer firefly larvae are born next season. Where fireflies once had uninterrupted forests and fields to live and mate, homes with landscaped lawns and lots of exterior lights (that some people leave on all night) are now the norm.

I find it distressing that so many folks are obsessed with the idea and the reality of ‘Light’ in all its manifestations and yet we are losing the very creatures who actually speak the language made of light.