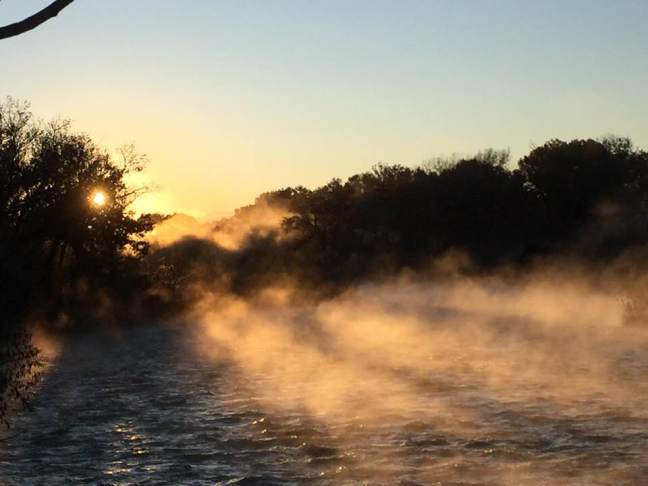 In Abiquiu New Mexico I walked down to the river and Bosque (wetland) communing with trees, leaving in the dark and returning before dawn every morning. Red Willow River is a tributary of the Rio Grande. I didn’t need to see; my feet knew the path by heart, so I was free to let my other senses take precedence. Listening to the sound of my feet, the first bird song, I moved into a still place, while first light gathered itself around me like a luminous cloak under the cottonwood trees. On my return the curves of the river and the dazzling painted sky held my rapt attention  … I didn’t realize for a long time that this daily meander was actually a walking meditation that helped stabilize me in a place that I loved but could not call home.

In the mystical magical twilight, if the conditions were right, I witnessed the mist rise over the river and whenever this happened it seemed to me that I ‘sensed’ a figure emerging from that cloud… this apparent apparition never ceased to pull me into her ‘field’. The woman was always weeping and I called her La Llorona, believing that she wept for the Earth, my precious Earth, because her animals and trees and plants were dying. Extinction was concrete reality, a daily occurrence. Cultural denial made it impossible for me to share my grief, but here, with La Llorona, I was witnessed and free to mourn…

The story of La Llorona is told throughout the Southwest and when I first heard it I knew it was a lie.

(see my blog for my interpretation of the legend sarawrightnature.woodpress.com)

According to the Spaniards, La Llorona was a young woman who was supposed to have murdered her children in a fit of rage because her lover abandoned her. She could be heard weeping at the river at night, searching for the dead children she abandoned. She was reputed to be a threat to any child left alone at night.

Recently I learned that the real story of La Llorona had historical beginnings that began about ten years before the Spanish conquest as omens experienced by the Indigenous Mexica (Aztecs).

The earliest texts that mention La Llorona are located in the twelve books of the Florentine Codex. The first books were written in 1577 but can be dated earlier. Book twelve was originally written in the Nahuatl language in 1755 and here Native elders stated that ten years prior to the arrival of the Spaniards the Mexica began to witness a series of omens. The prophecies signaled the arrival of the Spaniards and the downfall of Tenochtitlan. In the texts a woman is heard crying and screaming at night crying “my children, we now have to leave… where shall I take you… or more ominously, my beloved children I am going to leave you now.” Two of these books indicate that the woman crying at night was the goddess Cihuacoatl whose name means “Serpent Woman”. In two texts the woman has a head of a woman with horns and develops a serpent’s body. After the conquest of Mexico one book makes the terrifying assertion that the goddess ate a child in her crib. The twisted version of the story of La Llarona as it is still told today also began after the Spanish conquest.

That La LLorona is a compassionate grieving Mother goddess figure seemed obvious to me when I first heard the Spanish rendition. I immediately thought of Our Lady of Sorrows, the Catholic Mary figure who is also a goddess. Guadalupe also came to mind.*

My personal experiences with La Llorona have moved this goddess beyond the original story. It is absolutely real to me that today this figure still appears out of the waters and is mourning the slaughtered trees, plants, animals, – the other children of the Earth (I have experienced her presence here in Maine by my brook).

There is a Pueblo belief that the Rio Grande and its tributaries is guarded by a Horned Serpent, Avanyu, whose petroglyphs and pictographs adorn canyon walls and rock outcroppings in the area. This Serpent of the Waters is intimately associated with rains and each spring the Pueblos hold a Snake Dance to call down the waters from the Cloud People.

Living in Abiquiu brought me face to face with what happens in severe drought. Desertification is occurring; the Cottonwoods and many other plants are dying. It was/is a terrifying reality to witness firsthand the ravages of a land that has already caught Fire. Avanyu seems to have withdrawn ‘his’ protection. He is considered to be a male figure to the Pueblo people and others but I see Avanyu as the Serpent Goddess, once again stripped of her female powers. These powers include precognition/ second sight and are experienced through the body through dreaming or through our senses even if they appear as ‘thought’.

Mythologically, the serpent has been consistently associated with the Life Force, the body – ie. embodiment.  Creation and Destruction. Christianity turned the serpent into the “evil” one who, of course was female and whose body was the source of shame and misery.

I conclude with a dream I had last November when Avanyu, as a GIANT python type snake appeared in the Rio Grande. This serpent was so enormous that all the river water disappeared underneath it and it was coming towards us radiating all the colors of the rainbow – its body was pulsing with intensity. In the dream I was terrified and then struck dumb with fear recognizing that some new unknown Collective threat was coming … Covid was on its way.

*Guadalupe or Tonantzin/multi-valenced Earth goddess  originally belonging to Aztec people first appeared on a hill outside of Mexico city ten years after the Spanish Conquest of the Mexica in 1531. She was brown skinned. The top priority of the time was to convert the Natuatl speaking Indigenous peoples to Christianity. Although the church attempted to Christianize her Guadalupe remains to this day a goddess belonging to the people. She is invoked as a power of social justice, for her compassion and strength, and as an image of Motherhood. I don’t think it’s coincidence that she first appeared to the native people after they had been conquered….and that according to some sources she has a serpent aspect.  As Cihuacoatl Tonantzin/Guadalupe is Serpent Woman. Creator and Destroyer.