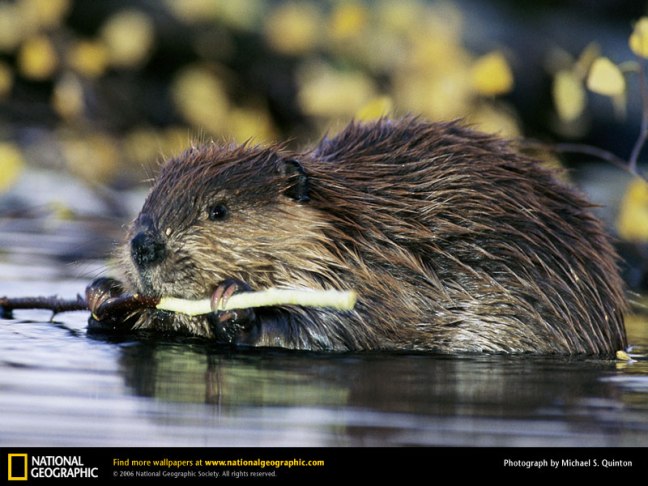 It’s cold – 18 degrees – the coldest it’s been all fall, and the sky is clear, the air bone dry. I awaken remembering that today my father died on another Thursday many years ago at age 74, only two years older than I am now. I imagine the ice closing around the beavers’ den whose members have flooded the field with water below my house.

The morning of my father’s death, moments before I got the call, I awakened from a dream that told me that my father had become a beaver. That Thanksgiving, the first of oh so many that I would spend alone over the next twenty some years, I opened a hole in the ice, cut some poplar branches and sank them under water for the beaver family I had befriended the previous summer, who in my mind now bore my father’s name and were intimately associated with him. I wondered then about death and transformation.

I spent that first winter after my dad’s death learning everything I could about beavers.

It was uncanny that the dream picked the beaver of all animals to transmute my father’s energy (and perhaps information too), because although my father was a man who lived his life in the fast lane in a concrete world, paradoxically he was also caught under water. Rarely did he surface as the deeply compassionate family man he was. His young children experienced continuous uncontrollable bursts of rage and terminal impatience. We learned to fear him. My father’s uncontrollable temper remained a lifetime nemesis.

I buried my father’s ashes twice. Now they lie beneath the house under Trillium rock, near those of his only son, a child he adored, a child whose death he never recovered from. Fortunately, I gave him two grandsons to love.

During most of my father life I did not believe he loved me, so I was stunned to experience a profound rush of his love for me after his death. Memory re –surfaced from the deep (Did the beavers help me?). The times my father comforted and held me when I was a small child, holding my head tenderly and cleaning up the mess when I threw up, rushed trips to the hospital without my mother, tucking me into bed, reading nightly stories, teaching me about the stars, and later as an adult, appreciating the way my father provided financially for his distant wife and family, the weekly visits to see his own mother that continued for ten years although she no longer knew him…

I think it was piecing together these memories that taught me that actions always speak louder than words, that fiery tongues of anger, anguish, disappointment do not make the man (or woman). What made my father so special was that he was capable of deep feeling and acted on that feeling in concrete ways to care for those around him, especially the members of his own family.

My father spent his life as a caregiver.

This was a revelation to me as was the insight that followed; that I too have lived my life as a caregiver, a woman who not only loves her family fiercely but also one who loves each tree, bear, dog, and bird caring deeply for all. I am my father’s daughter, after all.