I walked down a path of dried grasses and crossed a little bridge. I listened with pleasure to the sounds of river water flowing under me. Some part of the Chama (river) had been channeled into some sort of canal beneath my feet. There were large sprawling deciduous trees overhead and I could feel the peace of this place permeating my mind and body. I was relaxed and alert as the path veered to the left opening onto a modest adobe house with a small covered porch or Ramada. To the right a steep mountain rose out of a nearby field. Dried cornstalks seemed to be waving as an invisible breeze brushed their papery leaves.

People were wandering around outside, some sitting under other trees around tables all talking quietly. I was struck by the sense that there was no clear boundary between inside and outside; the two spaces, the adobe house and the rest of nature seemed to flow one into the other. Dried Datura flowers were hanging from the ceilings and Hopi pottery shards lay on one of the tables. A huge Great Pyrenees greeted me in a reserved but friendly manner; as I bent down I lost my hands in her thick white fur.

Almost involuntarily I was drawn to the painting of the Indian woman with a bowed head who was wearing a living crown fashioned out of the magnificent sacred Datura blossoms I loved so much. This painting of the woman, with a face like a Madonna replete with flowers and a brilliant yellow billed toucan was hung at the edge of the Ramada. I was astonished by the image because it seemed eerily familiar but it wasn’t until I began to write about my experience that I recognized that this painting and others like it were manifest expressions of the ancient Neolithic bird –woman archetype. I plan to return to buy this print.

Other paintings caught my eye as I approached the porch. I was swept away by the plethora of graceful women and their animal familiars. I stepped into the adobe with open kitchen where Armando was preparing a bowl of homemade chicken posole for someone…Behind the big black velvet screen that was adorned with paintings and two sculptures I glimpsed a beautiful healthy indoor cactus garden that looked out on the field and mountain.

Guadalupe’s sculptured face (and the face of the angel who held her) was the purple of wine colored grapes. I stared, at first startled, and then gradually comprehending… The rays that surrounded her were made of spiked golden agave leaves. Each detail of Guadalupe’s cornstalk body was meticulously fashioned. Bits of clay and brightly colored stones adorned her robe. I was unable to look away and sat down in a chair to be with the sculpture and then the rest of the paintings in a quiet way. For a while I entered another field of awareness one beneath or beyond thought. 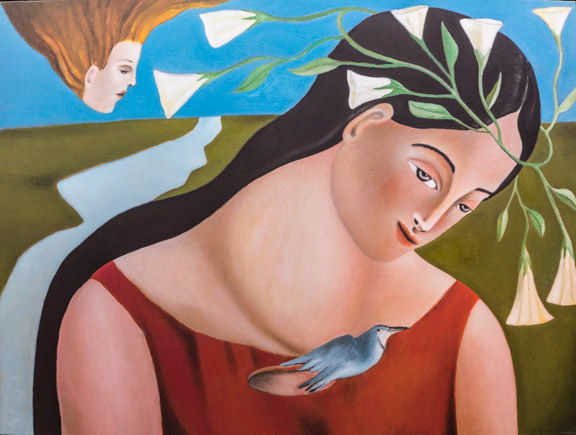 There was something about the way Armando portrayed women that seemed infinitely wise, yet familiar. The Indian women were stylized, ageless and sensuous, rounded in form, most with long flowing black hair. Gracious. Both spiritual and sexual elements were blended seamlessly into each painting. All had eyes that were softened and unfocused giving them a dream-like quality. In one large painting a woman and a young man were flanked by graceful white water-birds (probably egrets) who regarded the observer with keen human-like eyes. I noted the distinction between the dreamy unfocused eyes of the two and the intensely observant eyes of the animals. The relationships he depicted between women, animals, flowers and birds also spoke to me of seeing beyond the veil as well as depicting interspecies communication at a cellular level. These paintings seemed to reflect my deepest longings and the depth and breadth of my own experiences with animals, flowers and birds, the powers of water personified by the river, and the moon. I was astonished, stunned, humbled by the recognition that someone understood.

It wasn’t until the second day when I first saw the painting of the two Mexican men facing and touching one another on the shoulder and face with clear untroubled eyes, one with a small flower in his hand (Somos Novios) that I realized that for Armando the power of relationship that he expressed so poignantly through his paintings of woman and nature extended to men as well, although in the painting of the two men it was expressed more directly through feeling and touch. How I wished a painting like the one I was gazing into could penetrate the haze of the power driven patriarchal culture that forced men to abandon genuine feeling…

When I met Armando I involuntarily clasped my hands together as if in prayer while I asked about Guadalupe’s face. His voice was soft, almost musical, his face round, his eyes were large, deep mysterious pools, and his skin burnished like almonds. Only a bit taller than me he spoke with a thick Spanish accent, slowly and replete with feeling, answering questions I can no longer recall asking. Being around him felt inexplicably safe…

I returned to Armando’s house each day of the Abiquiu Artists’ Tour – three days in all. Each time I walked down the path I had the same experience of moving into an altered state or dimension in time… each day I was invited to have a bowl of the celebratory Mexican posole which Armando had prepared for his guests. Each day hours passed without my knowing how long I’d been there. The last day his partner invited me to sit with them under the trees just after I arrived and Armando replied, “No, first she has to sit with the paintings.” He knew.

That third day I finally got beyond the lure of the paintings long enough to gaze intently at the whimsical sculptures that were also hanging on the screen and walls. Archetypal symbols abounded; piercing eyes, flying horses, cats, wheels, stars, sun rays, mirrors, animals with teeth, came at me from every direction, and I was once again flooded with delight, awe, discomfort, as I allowed the images to penetrate my awareness. I was startled anew by this multifaceted aspect of Armando’s imagination, creativity and ingenuity. These three – dimensional “stories” were impeccably crafted out of natural materials, and many were in flight. To me they seemed to be a child-like extension of the man who created them.

I recall at some point sitting on the porch opposite Sugar, the giant great Pyrenees, who lay stretched out on the couch, when Armando sat down next to her and laid his head and torso against the animal’s thick fur. The deeply loving unconscious gesture struck a chord that resonated… There was a basket of apples next to the couch with a sign that said, “Please take these apples with the holes to eat!” I happily complied and was delighted but certainly not surprised that Armando grew his garden organically.

I sighed as I walked down the path back to my car on the last day of the studio tour. Here was a Mexican Indian who was so attached to his Tarascan roots that he could fly, and who crafted his art from his life and his dreams. I was filled with wonder that such a man existed in the flesh, a man for whom the idea of separation was a total anathema…That I was in love with Armando’s art was obvious!

My lasting impression of Armando is that he is a man who is loved by all of Nature, blessed by the sun and the moon, the animals, the plants and the dreams that he lives by. 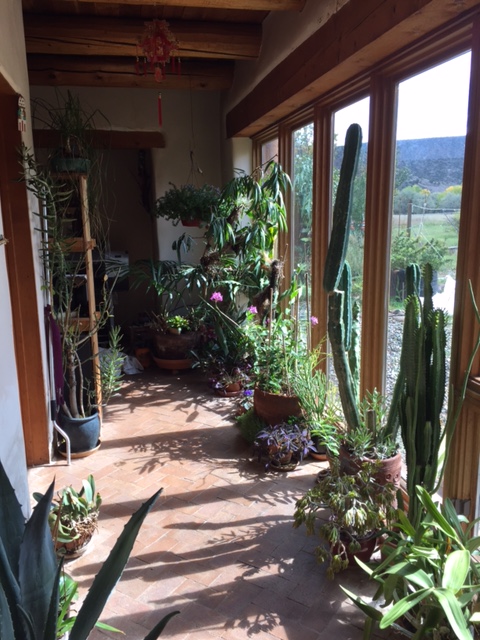