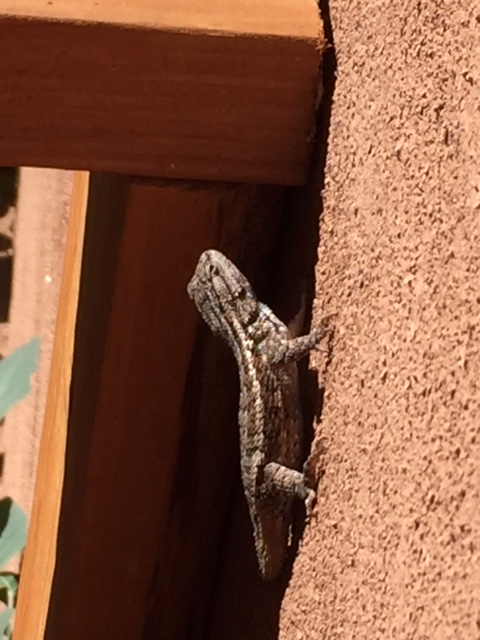 There is a wily sagebrush lizard

peeking out of star dry flowers

All but two of his

since the night freeze settled

How brilliant that he

should choose such a practical

warmed by an autumn sun,

Assured of food from insects

for a while yet,

his eyes are narrow slits when

he slumbers, dreaming his next meal.

the variety of bugs

who still visit this

canny presence in their midst!

It is mid October (10/18) and the mountain peaks wear snowy hats. Here in the valley we have had more rain in the last ten days than we have had all year … the first flakes swirl. The dark eyed juncos have arrived. For the last few days I have been noticing the absence of my house lizards who seem to have vanished with the heat. There are only two left out of the original 6 and these two hide behind the slat closest to the door, slipping out to sunbathe when the sun warms my adobe walls.

When I first met the “compost lizard” I knew he wasn’t one that lived here all summer. Earlier in the season I had a large compost lizard that moved to the south wall as it got cooler. So where did the small compost lizard come from, clever little fellow? A compost heap is a lizard heaven of sorts with all the leftovers watered routinely to keep the worms happy, and with heat trapped in a round plastic cylinder the wind is kept at bay. At noontime I go out to visit him noting his blue belly hoping that he will stay around a bit longer, perhaps fattening himself up for an intermittent winter sleep. I would like to think that he will find a safe burrow in this mountain of debris, and that we shall meet again in spring.

I recently read that adolescent lizards are more active in the fall, this might account for the sudden appearance of the compost lizard. I also learned that occasionally lizards will “hibernate” together… I wonder if this might be true for my two house lizards who are currently hunkered down behind the slats and the house… I will be watching to see how long they stay there.

Lizards are not active during winter; they enter a state of dormancy called brumation which is not the same as hibernation. With both, metabolic processes slow down but with brumation the lizards alternate dormancy with activity. They need to drink water to avoid dehydration. Lizards build up a high level of glycogen (sugar) that can be used for muscle activity. They also need less oxygen to breathe and this is a good thing because some dig holes in mud where oxygen levels are lower. Other lizards will hide underground in old burrows, in a hole in a tree or under leaves. I love knowing that my lizards will still be around even if I don’t see them!