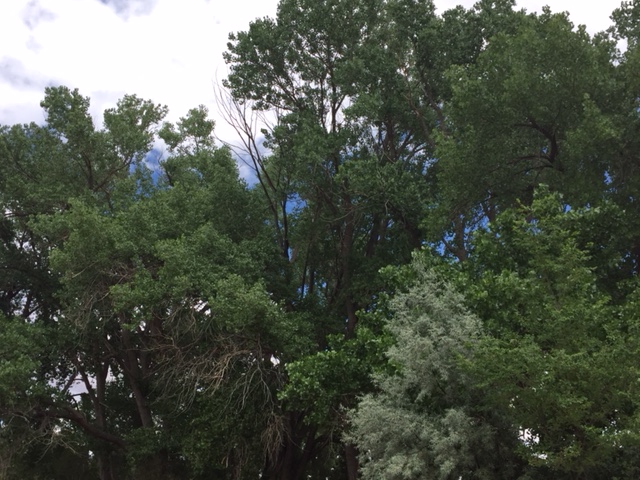 (The Cottonwoods outside my window)

A couple of days ago I went to a late spring Corn Dance at Okay Owingeh Pueblo. For the Tewa, spring, summer and fall are dedicated to the seasonal agricultural round and the late spring dances acknowledge the necessity of adequate rain for the newly planted corn to grow. Because the Tewa people have a living tradition each dance is unique although a general pattern is followed – one that has ancient origins. The point of these dances is to pray for rain, help the corn and other crops grow through dancing prayer, and to keep the Earth and her people in balance. One experiences the dance; no words are spoken. Drumming is an integral part of this ritual cycle.

There were many participants, men women and children, and a number of clay striped clowns who wore turtle shells on their legs. Both the women and the men also carried and shook gourds that sounded like rain. Both men and boys wore kilts trimmed with bells and shells and turtle shell rattles on their legs. The men also wore brightly colored arm – bands some of which were yellow. Most had feather top knots. The women wore white wrap around high legged moccasins made from the softest deer skin, beautifully belted dresses, predominantly rose patterned shawls, their shiny long black hair hanging down their backs. The men danced in moccasins trimmed with skunk fur. Some of these moccasins were dyed a bright yellow and I wondered if the color had something to do with the corn. Skunks love water so even the footwear that touches the Earth becomes a prayer for rain.

Each set begins and ends in one of the four plazas to honor each of the Four Directions with breaks between each set. I attended the first set and at the end of the dance all the dancers (there must have been a hundred or more) entered a ramada for a blessing and then filed into one of the two kivas where secret rites are completed in private.

Because it was getting hot I had not planned on staying for more than one set. I knew that the dance would be repeated in exactly the same way in each plaza until each of the Four Directions had been honored and the dance ended.

The rhythm of the dance had a hypnotic effect on me that by now I had become accustomed to experiencing. I find these dances deeply moving, perhaps because I have Indigenous roots, and because my life is so tightly woven to the cycles of Nature. I also understood that the Tewa believe that participating in these dances, even as a spectator helped the rain come and the corn to grow, probably the only reason the Tewa allow outsiders to attend the celebrations. These people are fiercely independent and do not share their traditions with strangers beyond allowing visitors to attend the dance. By maintaining this kind of vigilance they have managed to keep ancient traditions intact. One is left to interpret what one sees and experiences…

The striking aspect of this particular dance for me was the lack of corn imagery. Instead, everywhere I looked I saw men wearing wreaths of cottonwood, something I had never witnessed before. In addition, the women and children each carried sprigs of cottonwood branches. Fascinated by this change I called the pueblo the next day to find out if I had seen a corn dance. Yes, I was told. I knew enough not to ask impertinent questions about cottonwood branches. Instead I reflected upon the possible meaning of what I had seen, and what it might mean. That night I fell asleep listening to muted cottonwood conversation…

I am presently living in an adobe house that is situated under a giant stand of cottonwood trees, trees whose leaves flutter and rustle beguiling me to listen to their songs. Sometimes at night I imagine I hear rain falling…it takes me a minute to recognize that what I am hearing is the sound of cottonwood leaves communing above my head.

A day or so later it dawned on me that using the cottonwood boughs, a sacred tree to the Tewa and other tribes because it is associated with water, might have been incorporated into the dance as an additional form of prayer to call down the rains.

In Northern New Mexico we are experiencing an unprecedented drought. We had no snow or rain this winter, and thus no spring run off. Fires are burning out of control throughout the region and the National parks have been closed to camping and other forms of recreation. How this is going to affect the corn and other crops that these people depend upon for sustenance is unknown. The Rio Grande is low, and no longer reaches Mexico. A Mexican friend, and builder friend of mine finds this state of affairs confusing because as he asks “Doesn’t the water belong to all the people?” Apparently not, our Government decrees.

Meanwhile, I listen to the cottonwood trees with rapt attention adding my prayers to those of the people.

May the rains come.

Postscript: Curiously we had our first real rainstorm just a couple of days after the ‘Cottonwood Dance’ and who can know if the trees were listening and helped bring down the rain.

Cottonwoods, by the way have enormous taproots that seek the water table and must reach it in order to survive. Today, young cottonwoods are struggling because the water table has dropped. It is heartbreaking to see how few young trees are actually growing.