From New Mexico to Maine 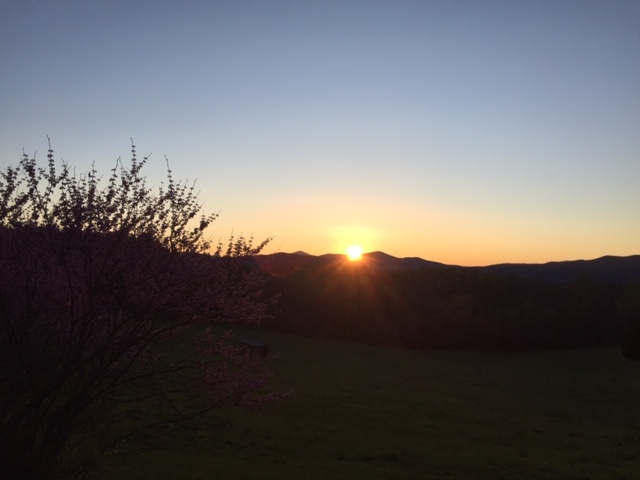 Last November I had a terrifying dream. I was looking down at a river from a great distance. A huge iridescent pulsing blue serpent (it looked like a python) was swimming along the river; it was bearing down on us; there was nothing I could do to stop it. For the Huichol and some other Indigenous peoples the presence of the blue serpent means death is on the horizon.

As a precognitive dreamer I recognized that some frightening force that involved a bodily threat was on its way (snakes represent the life force/body in most mythologies), but beyond this realization had no idea of the precise nature of this menace – just that it involved the whole culture. In late January I had two more precognitive dreams reinforcing the same threat before the C/virus struck the United States.

I was planning to return to Maine at the end of April because I had to be present for foundation work to begin on my little log cabin, but in early March I had a very personal precognitive dream. “It’s time to get going.” I began packing that day. More frightening dreams followed as my sense of urgency increased to an unbearable pitch. All I knew was that we had to leave as soon as possible. I barely slept, yet my dreams were relentless. I trusted the truths of my dreaming body because she is connected to the Body of the Earth… my earth body self knows things I cannot even imagine…

We left for Maine on the last day of March. A 2500 mile journey lay ahead but I was so relieved to be on the road moving away from an unknown threat even though we were also moving towards a peopled concentration of the C/virus. I had planned carefully for the trip. We slept and ate in the car, used the woods as our bathroom. Our only contact with people was at gas stations where we wore gloves, kept our distance, and paid with a credit card. With the C/virus escalating as we moved towards the east coast it was imperative that we took no chances.

There were some serious issues between my companion and I that went unattended. I believed we were not in any hurry and could take as long as we needed to make the trip safely. My driver disagreed, refusing to stop for any breaks despite knowing that this unexamined  willful behavior was dangerous to his health. We made a record breaking trip in three and a half days, arriving here in the middle of the night in heavy rain.

I was unbelievably grateful although my nervous system had been on scream because of the interminable high speed driving and stress. Two days later my companion was hospitalized. He paid a steep price for ignoring my pleas and (probably?) those of his doctor. Fortunately, he is all right now. For about a week after our arrival every time I closed my eyes I saw a speeding highway. I am still recovering from an acute PTSD episode.

What got lost in the chaos/trauma around our return were the special moments we shared during this trip. All the astonishing Rosebud trees were blooming in four states we sped through. If we hadn’t stopped each evening I never would have gotten a picture of one. Night became my Beloved… every morning I longed for her and the peace that would come at the end of that day’s frenzied driving… 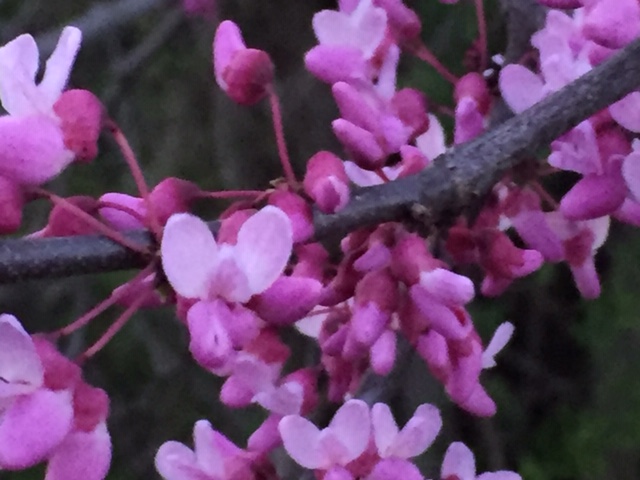 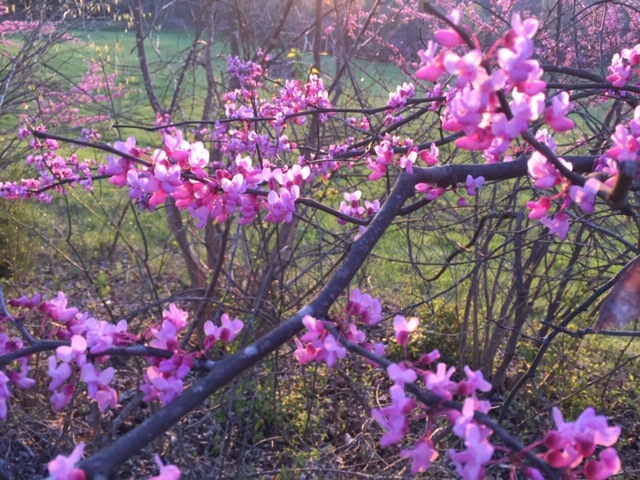 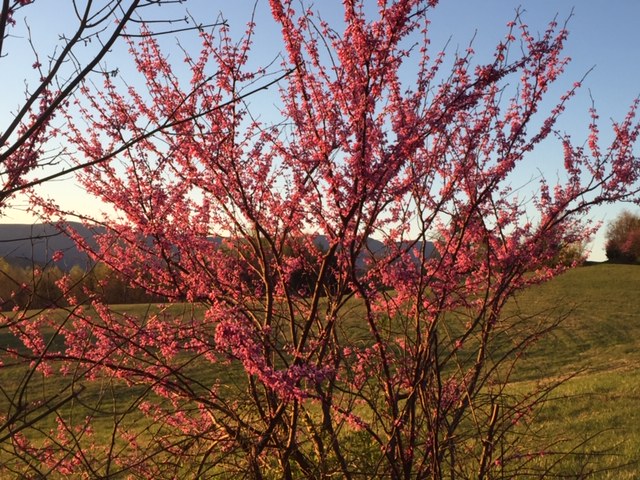 After finding a quiet place on a country road to spend the night I made sandwiches for us, fed the dogs, gave my dove Lily b his water and took my dogs Hope and Lucy for their only really long walk of the day exercising my aching back and body and breathing in the sweet night air in the process. On April 1st I heard the first peepers singing their hearts out. Every night I gave thanks for the day that had just passed. I experienced a strange sense of being protected by Something. 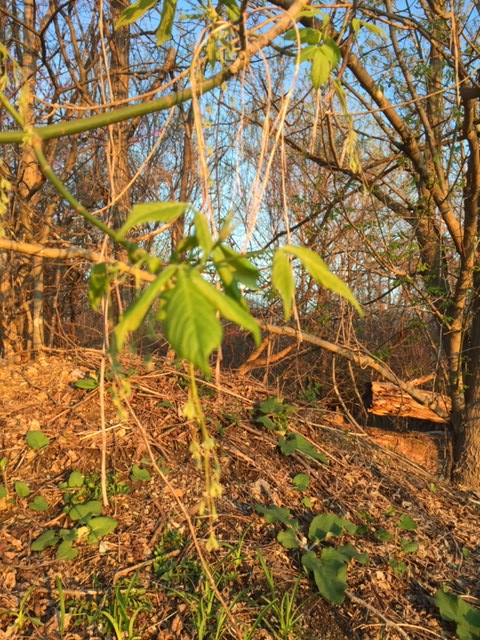 In the morning I awakened to the whistling calls of the Cardinals, (my absolutely favorite bird except for Sandhill cranes). I was starved for the spring bird cacophony that had been missing in Abiquiu. I was relieved to see that diversity still existed elsewhere. One night we stopped before dusk to camp in the driveway of an abandoned house. Lily b had a chance to be outside; he perched on an old upended garbage can and stared at his surroundings with rapt attention. I watched a phoebe fly into an open porch with twigs in her mouth. Meadowlarks sang heartrending serenades. Awake before sunrise I walked the dogs for at least 15 minutes and gloried in the shimmering golden light of dawn… The pale green of unfurling leaves brought tears to my eyes. One night we camped on a hill inside a magnificent six-acre state park. While walking the dogs just before dark a whole herd of white – tailed deer passed by us in the valley below. It was here that I was able to take pictures of the Rosebud trees. That pre-dawn walk will stay with me forever. The rolling mountains were so astonishingly beautiful tinted in deep green and lime. I fell in love with spring again. 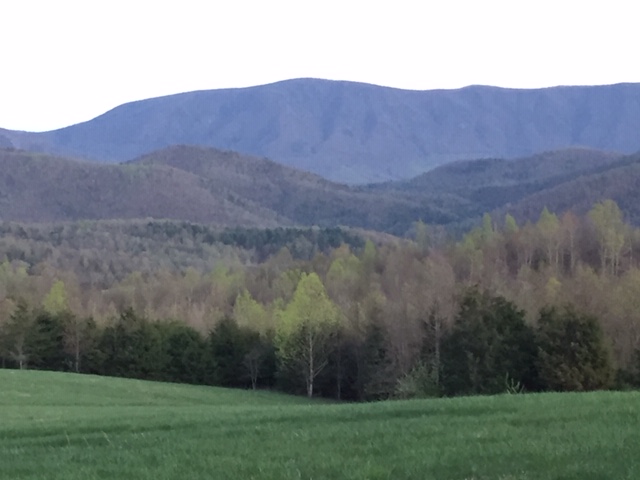 These precise images stand out with a peculiar starkness and clarity, perhaps because overall the trip was exceedingly difficult and exhausting. For those moments at least, I was emotionally present, living in my body.

I am writing this reflection eighteen days later. The threat of the virus is minimized in this area because stringent precautionary measures were taken from the beginning of the viral outbreak. It is possible to shop, use a pharmacy and get gas locally. My vet, doctor and the dedicated folks of the Bethel Health Center are less than ten minutes away.

I wonder what specific threat was avoided by our hurried departure from Abiquiu. If past experience is any indication, I probably will never know.

However, with that much said I suspect it had to do with the virus itself. My companion repeatedly ignored my pleas to use protection when dreams told me the virus was “under our feet” before it was publically acknowledged in Arriba county where we lived.