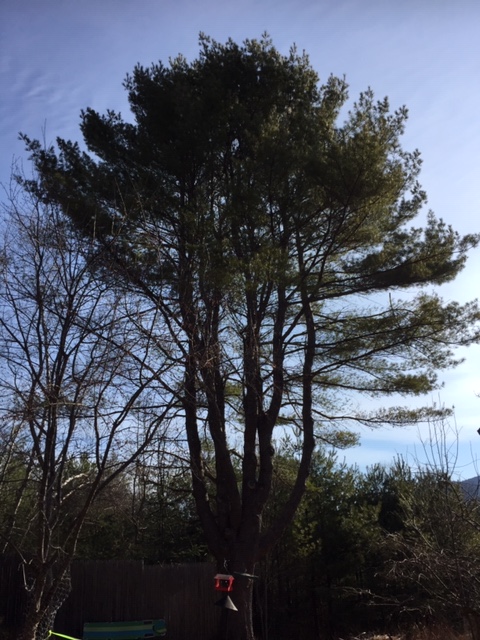 A couple of days ago after an exhausting day of chores I lay out in the sun in my snow pants under the tree I call the “Mother Pine” because she shelters so many creatures from birds to bears. It was late afternoon and the sun was sparkling like a cracked diamond through a myriad of branches over my head. I closed my eyes and listened to an evergreen symphony. The songs produced by pines and other conifers as needles sway and touch soothed me. How much I appreciated the sound of light winds slipping through the trees.

I had recently returned from the desert where these sounds are totally absent. Instead, ferocious west winds hurl and churn dust and dirt in my face making it impossible to be outside in the winter and spring on many days. Because I have emphysema, I am too often trapped in my house by polluted air… To be present in this precious breezy moment allowed me to feel a deep abiding gratitude for all the songs of trees … and for this patch of land I call home.

While lost in this reflection I was startled as a small object dropped onto my chest. I opened my eyes to a nuthatch (who was perched on a branch overhead) who promptly released another piece of bark that fell on my belly. Laughing, I was tempted to believe the nuthatch was trying to get my attention…

However, the most probable cause was that the little upside down bird was hunting for insects. Either way this delightful creature had gotten my attention! I gazed up into other branches of the old field pine and counted about 10 nuthatches all ferreting out tasty insects. I noted a bevy of robins; the chickadees were chirping on twigs, or using the tree as a lift off pad to reach the nearby feeder. During the summer, a pair of Red winged Blackbirds nested here and the Cardinals camouflaged their scarlet coats in deep green needles as they too readied to visit the feeder. Last year a lone Grackle made a home in Mother Tree’s branches.

I shuddered, remembering how I had considered taking this tree down thirty – five years ago because it blocked my view to a few of the undulating mountains beyond, at least when I was sitting on the porch. Nature intervened by placing a double set of deer antlers just beneath the tree just a day or so after I had this thought. Since white tailed deer were aspects of the Beloved finding those antlers settled the matter permanently…

Above me the tree limbs and needles disappeared into a deep cobalt sky and as I lay there a deep peace flowed through my body and quieted a mind cluttered with fear over the Corona virus, other health issues, and a crumbling house foundation.

I breathed in the sweet scented mountain air …

Then lightening struck. Here I was lying under the Mother Tree on the same day my mother died in 1993. And I hadn’t remembered.

In the intervening years I had come to forgive my mother for her harsh treatment of me. I was never good enough, bright enough, kind enough… I spent my entire life trying to please her.

Only recently have I been able to face the stark truth. My mother did not love her daughter; and now it no longer matters why.

As I continued to peer up through the thick green and blue the peaceful feeling returned. I acknowledged my mother’s death day … thankful that despite her feelings for me, she had opened the door to that greatest Mother of All – Nature. And because of this gift I lived.