Last year I attended a bonfire on the night of the winter solstice at a friend’s house. As my companion and I walked towards the ledge where the fire had been the year before we were both astonished. Where was everybody? We stood in the dark confused. Minutes passed.

After suggesting we leave, my companion remarked with annoyance, “What the hell is going on here?” A Rhetorical question. I sure didn’t know.

Sudden hooting split the night and some dissonant musical sounds seemed to be coming from out of the bushes below us.

Following the sounds we descended the steep hill and discovered that the fire was at the river’s edge, and that a few people were already gathered there.

Unbeknownst to either of us the location had changed, and from our vantage point on the hill we couldn’t see the fire or hear any sounds. I had been looking forward to this celebratory turning, and liked the idea of sharing it with friends. Yet, now I felt uneasy.

As I recall, there were noise makers (?) but what stuck in my mind was my sense of confusion. Was this some sort of joke being played on us, and if so why? The anguish I felt was palpable. I barely remember the rest of the evening. I felt completely shut out and took refuge by staring into the flames of the fire, ending the evening by giving a solstice gift to my friend.

The next day I believe, I felt compelled to write to my friend to tell her how upset I was over what I perceived had happened. I love this woman, and consider her a soul sister.

She seemed as deeply distressed as I was. And when we spoke, cried, and hugged all at once, it immediately seemed clear that she assumed that we would know that the location of the fire had been changed because of a recent fire that had broken out further down the Bosque, and that no joke of any kind had been intended. I was so relieved to let the whole thing go.

My perception and that of my companion’s had apparently been totally distorted.

I took full responsibility for the distortion.

But I was floored.

I became a psychologist because I am a person who needs to root out underlying truths. I am like the proverbial dog with a bone, unable to put down an issue until I have unraveled it – even if it takes years. No dream came to me to help me unravel this conundrum. I have been sitting with it for a year, and have used the incident twice to demonstrate to others how perception can be skewed in ways that sometimes appear incomprehensible.

The closest I can come to an explanation for this drama will be difficult for most folks to comprehend, let alone accept. I have been a ritual artist for almost 40 years and have participated both alone and with others in these eight yearly turnings of the wheel and know from countless personal experiences that extraordinary happenings can and do occur during these times of what I call “natural power”. Sometimes these energies move in a positive direction and sometimes they move in reverse. I think what happened that solstice night was an example of winter solstice energies constellating around a gathering in a negative way. Everyone was apparently impacted. That fact combined with the astounding synchronicity that my companion and I experienced – the weird sense of being tricked in some way – gives credence to this explanation. Stunning synchronicity, is in my experience, almost always associated with these forces of natural power that can manifest for good or for ill.

When I brought up coming to the fire this year I was astonished to learn that it was assumed by everyone that I would not want to attend because of my experience last year. Since I believed the matter had been put to rest between us I was bewildered by this assumption. When my friend and I discussed this unfortunate experience she wanted reassurance that this kind of dissonance would not occur again at this year’s fire. “Everyone had gotten hurt,” she said. This remark surprised me because up until now I had assumed that this issue was between us and didn’t really involve others. I realized I was not clear why these people were so upset. I didn’t even know one of them. It wasn’t as if I said anything to anyone else. Still, I was only too happy to reassure her.

But her remark about everyone being so hurt gave me a clue. Apparently everyone had been negatively impacted? When?

When I hung up the phone that I heard that nagging inner voice saying ‘you are assuming too much responsibility for this incident’. My telepathic bird Lily b started bellowing.

Whatever happened that night may remain a mystery but I believe that all of us were unwitting players in the dark side of a winter solstice drama.

Postscript 12/28/19: When I published this piece I had just received information I hadn’t had time to process. Others were upset???  I had said nothing to anyone at the fire; I spoke to my friend privately believing that the issue involved a problem between the two of us. I desperately wanted to clear things up and thought we had. I missed the obvious. Others were “upset” because my friend had revealed my private feelings to them after the night of the fire…an action on her part that simply hadn’t occurred to me. And the general assumption made by others that ‘I would not choose to be involved in a solstice fire again this year’ had everything to do with everyone else’s undealt with feelings while I was the one who was still being blamed for what happened one year ago. Wow. Now it all made sense.  I still conclude that the dark side of the solstice was operating that night and afterwards. Unowned feelings and an unwillingness to talk about them honestly (on the part of others) made things worse. Sadly, I  have been carrying full responsibility for this baffling incident for an entire year when others were culpable too. 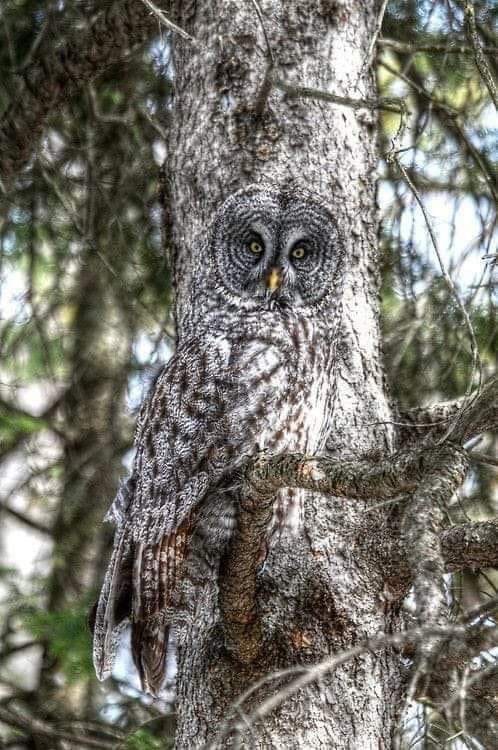 Yesterday I dreamed that I discovered a bird’s nest that was hidden in the center of an evergreen tree. This little dream moved me deeply because this is the time of year I celebrate my love and gratitude for all trees, but especially evergreens, and the dream felt like an important message. For me, the “Tree of Life” is also an evergreen at least during the winter months.

Outdoors, I recently placed a glass star in the center of my newly adopted Juniper here in New Mexico, repeating a pattern that began in Maine years ago with my Guardian Juniper in whose center I also placed a star…Inside the house an open circle made from a completely decayed tree trunk sits at the center of my Norfolk Pine. Indoors both boughs and tree are festooned with tiny lights. The point of these making these gestures was/is to remind me that tree bodies are sacred in their wholeness and each tree explicates the immanence of divinity. Another way of saying this is to say that Natural Power lives in trees.

I do not believe in god.

But the reality of “Natural Power” is an ongoing force in my life. When I am deeply troubled I turn to trees or birds or animals for help, and they always respond, although often it takes me a long time to understand their messages, mostly because my intellect and cultural conditioning gets in the way of intuition, sensing, and feeling.

Sometimes dreams help me to bridge the gap, and when I dreamed that the tree held a nest I felt a great comfort moving through me…

It seemed to me that the dream was showing me that the “little bird woman self” (most vulnerable personality) has a safe place to rest within the protected boughs of the evergreen, also her Tree of Life.

Because I am living in two worlds and must find a way to move between both, I am by necessity a “snow bird” migrating with the seasons. Thus, it means a great deal to me that I have a place to feel contained and nurtured among fragrant boughs anywhere I go.

The tree and her nest may be hidden, but it is there, and I found it.

Perhaps I have found home, after all.