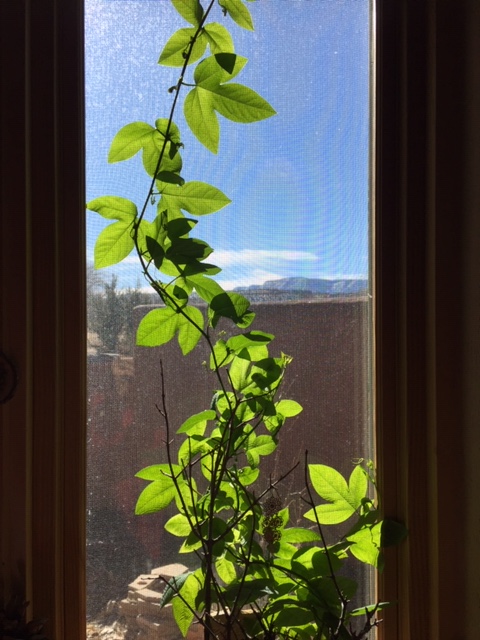 My first unusual experience with a plant occurred when I was a baby. I had been set upon a blanket and left in the summer sun. Above me a large sunflower bowed her head. As I gazed up at the disk it suddenly began to expand growing larger and larger and then shrunk again, over and over. What I remember best is that it seemed to be pulsing both inside and outside me at once. I was fascinated but totally accepting of my experiential reality.

I don’t remember when I started to talk to plants but I was gathering flowers as a toddler. By the time I reached adolescence I knew that my love for plants was reciprocated; but I certainly couldn’t talk about this intimacy because high school science taught me that these relationships didn’t even exist. Secretly, I reached the conclusion that I must be crazy.

It wasn’t until my late thirties that I began to hear tree and plant voices. They either spoke to me through dreams or through that same peculiar physical sensing or feeling/sense that seemed to come from inside and outside me at the same time. When they began uttering a simple word or phrase in response to questions I was thinking about or asking I was non – pulsed, dis-believing.

I rarely understood what the plants were trying to tell me. Trees were the exception; they told me in dreams (and through my physical senses by that peculiar pulsing) that because of humans whole forests were dying. I was also warned that the animals were going to disappear for good. These dreams and thoughts terrified me and I kept them to myself.

And then one day almost 40 years ago I became a plant. The dream seemed so utterly fantastic that I never forgot it:

I was a beautiful green vine that hugged the earth even as I crept along the ground; my tendrils seemed to be directing my movement along the forest floor but I had no idea what kind of plant I was or where I might be going.

By mid-life I was still dreaming catastrophic dreams about dying trees and animals but I had become a writer and began to advocate for nature in a creative way, an endeavor I continue today. Writing grounded me in my body and helped me to believe that someone might be listening. Maybe I could help the animals and plants survive?

I received a grant to study medicine plants with local shamans in Peru on one of the tributaries of the Amazon (I had become an herbalist early in my adult life), and two nights before my departure I dreamed a second vine dream:

I was the emerald green vine hugging the ground as I moved, only this time each of my leaves had huge eyes that were combing the forest floor.

During the course of these trips (I made three in all) the shamans “saw” that I was seer, someone who could read the future. Their recognition stunned me, especially since I didn’t really believe it myself. I eventually gained enough confidence to ask my teachers what the vine dreams might be trying to convey to me. Each shaman told me I needed to take Ayahuasca to find out. Dismay overwhelmed me. Two early experiences with marijuana had resulted in my having hallucinations in safe places. Here, I was alone in the jungle of Peru. I backed out.

A few months after my return to the states my neighbor gave me a passionflower cutting. I was thrilled! I had seen so many passionflower vines cascading over the river intertwined with a fantastic forest of trees and shrubbery. I kept passionflowers in my room in Peru and attempted to bring one home but the cutting froze en route.

There was something about the vine with its spiral tendrils that pulled me into a deeper relationship than I had previously experienced with any plant – or at least I was more aware of the strength of this particular relationship between the plant and myself. Some mornings I watched my passionflower climb through thin air her tendrils waving as she stretched towards the light. During these times it almost seemed to me that we shared a single mind. She moved almost imperceptibly and I would slip into a light trance to breathe with her as she crept along a ledge or window.

By the time I arrived in the desert I had a daughter plant and both mother and daughter vines came with me. I gave one away to a friend, and then the other one lost leaf after yellowing leaf, lingered, and then died ‘inexplicably’ with me begging her to live. During this period I was also in personal crisis and eventually became ill. It was impossible to escape the sense that this vine and I shared not only a mind but also a body.

I took a cutting from the “mother plant” and it rooted. Passionflowers re – entered my life and I was profoundly relieved. However, they no longer flowered for me with any regularity, or didn’t until I went home to Maine last summer. The one I nurtured there had a hundred blooms ready to open but a last minute crisis prevented me from bringing her back. I notice that although I love the flowers, that these days, it’s the presence of the vine that is so important to me.

Three weeks ago I potted cuttings that were pruned from one of the vines that had almost died during last summer’s absence (when I believed they were being cared for by someone who clearly neglected all my plants). I put the pot on the kitchen windowsill and within a week one tendril started up the screen and this is when I started asking all the cuttings to cover the area to help keep the late afternoon sun from streaming in because it hurt my eyes.

Of course, the vine is phototropic (it normally grows towards the light) so it is no surprise that the vines started to climb the screen but I am asking them every morning to climb to the right, not towards the south where the most sun shines, and the cuttings are complying with my request as I shower them with loving words, attention, and gratitude. Two days ago one tendril reached the top of the window and I asked her to turn right again. She did. I have absolute trust that this collaboration between us will continue.

(But what will happen to my vines when I leave again for Maine? This is currently my deepest concern. They seem to need me to be present for them on a physical level; reinforcing the reality that there is a very complex mind-body relationship between this plant and me).

Here in the house I am surrounded by green plants and two trees. Outside I have the Bosque. Every morning in the predawn hours I walk down by the river and into the bog with its cottonwoods and cattails, its scrub and wheat colored grasses. Pre dawn meandering allows me to enter an altered state as I traverse the Bosque in circles listening to faint tree murmuring, feeling Life bubbling up from under my feet. It wasn’t until I came to the desert that I learned that I have to have trees and plants around me to thrive, and outside the Bosque provides me with trees that tower over my head. Frequently, I have illuminations or the meaning of a dream becomes crystal clear in this tree and plant refuge.

The day before yesterday I had revelation in the Bosque that stunned me.

I “saw” the leaves of the emerald vine/self of my two dreams the first of which, I had almost 40 years ago. I was a passionflower snaking her way along the jungle floor!

I suddenly understood exactly what those vines were trying to tell me. I needed to seek truths about my life and the future by putting my plant eyes and ears to the ground, allowing the emerald vine/self to take the lead. (Humans, including myself cannot see. My plant dreams were trying to convey that open spaces like the sky where transcendence replaces embodiment take us out of our bodies when we need desperately to inhabit them and turn our attention towards the Earth. Had we done this in time it might have made all the difference). The eyes and ears of my heart were embedded in the passionflower plant body who was not seeking outer light but rather darkness, a place of germination/birthing beneath the jungle floor. My plant was directing my attention to the inner light, a light only visible when surrounded by darkness. My present job is to continue this process –and to turn my attention to that which lives below to prepare for further instructions.

First, I need to deal with the reality of the inevitable extinction of a species that includes myself (how do we imagine not being?).

Then, when it’s time, New Life will begin to emerge from below the forest floor.

I wonder in retrospect if taking any drug could have helped me unravel the meaning behind these dreams earlier in my life. I draw the conclusion that ingesting a substance probably would have not have made a difference because I was still being drawn to the sky gods – the transcendent ones. Embodiment was a word that had not yet entered my vocabulary on a feeling level. Even though I was in love with the Earth I couldn’t allow myself to be “known” by her. Even today I still fear being held captive by the underworld of my dreaming body, just as I fear death; so it appears that I have to continue my life’s journey in hopes of learning how to come to terms with these two personal fears…