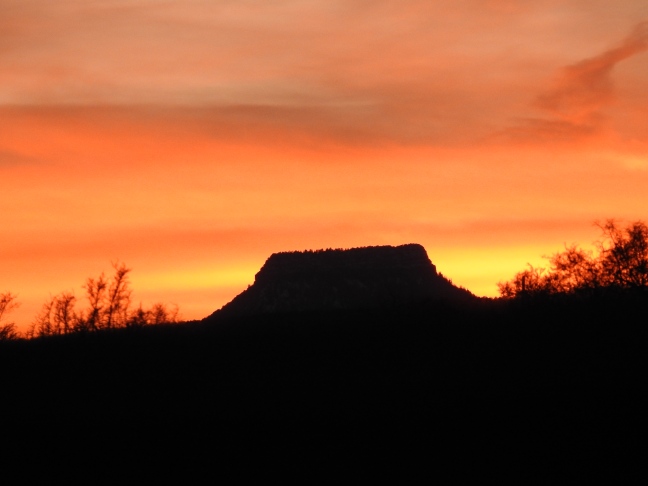 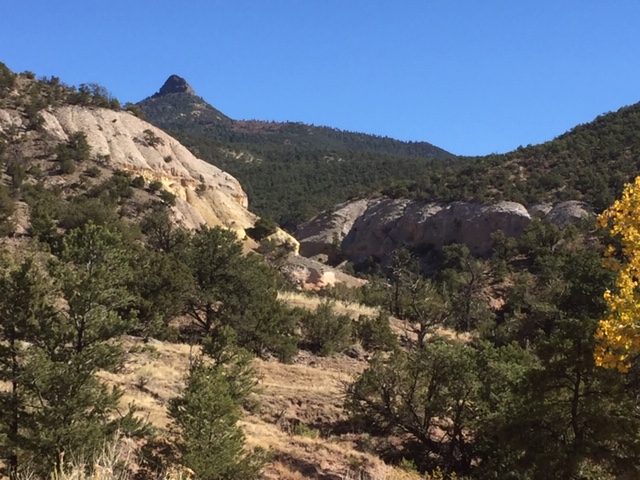 Two views of the Pedernal – The first taken from casita – the second back from the backside.

The first time I visited the Pedernal that overlooks Abiquiu New Mexico, that incredible flat-topped mesa where the Navajo ‘Changing Woman’ was born I fell in love! I was with my friend Iren who showed me a place where an enormous band of chert was located on the side of the mountain. The colors of the stone took my breath away – bitter orange, blood red, rust, dusky purple, ebony, charcoal, dense white, light yellow, pale pink, deep rose, blue gray – every color on the spectrum except deep blue was visible. I already knew that this multi-colored stone had been traded throughout the Americas by Indigenous peoples for millennia; I wondered if the arrowheads I had that came from Maine could have come from this mountain…

As we climbed through a forest of tall conifers I soaked in the view of a magnificent multi-layered tree line that stretched all around me as far as I could see on one side. The views of the distant snowcapped mountains were spectacular. I experienced a peculiar kind of “high” that I mentioned to Iren, noting vaguely that I suspected it had something to do with the trees.

That day we collected many pieces of chert that I still have. To digress for a moment, I think chert, or flint is my favorite kind of stone. In Abiquiu, another piece of the same kind of rock with lichen etched into its contours sits on a table in the living room of the casita. I have kept it watered for three years (!) because lichen still lives on this piece that Iren once brought back for me as a gift…

It wasn’t long before I began to make regular trips to the Pedernal, alone, with my dogs. There was something about the place… We hiked around in the gorges, discovering streams hidden below in steep gullies, examined caves, admired amazing rock formations and sat in the shade under towering trees whose fragrance was indescribable. The Pedernal was also the place where I saw my first bear, came upon my favorite wild cactus growing in profusion, discovered lupine and a multitude of other flowers that I have here in Maine. To this day, it is my absolutely favorite place except for the Bosque near the casita and the Bosque del Apache, the winter-land of the Sand hill cranes…

I noted that whenever I visited the Pedernal and began to climb around that physically I experienced myself as having a higher energy level than I did in Abiquiu. Clear thinking, relaxation and a sense of being grounded or earthed were other aspects that struck me as being unusual, especially the latter because I was so sensitive to altitude changes. It was impossible to ignore this general sense of well – being. Of course, I knew the Pedernal was reputed to be a ‘’power spot” but I wondered about the role the magnificent trees might be playing …

Because I love all trees I regularly spoke, touched, and leaned against these tall stately beings soaking in their essence.

I don’t remember when I finally made the concrete connection between the scent of the trees on the Pedernal and my sense of well – being.

Pinenes were probably responsible for my elation, clarity and relaxation. This forest was loaded with phytochemical compounds that can and do improve our health.

During the long winters in Maine I burned balsam and cedar on a daily basis to keep the air inside the house purified. I loved the scent and also used the oil to help rid myself of headaches. I was convinced these evergreens had health benefits years before I ever heard of pinene, and I knew that Indigenous peoples had used these plants in much the same way I did for millennia.

When I learned about the medicinal value of pinene from a western point of view I felt frustrated that western medicine has been so slow focusing research around these helpful chemical compounds.

Pinenes are produced by turpentine trees; these phytochemicals are found in pines, cedar, balsam, juniper and other coniferous plants. Sage and artemisia as well as cannabis contain them too, as does eucalyptus but Pinenes are strongest in evergreens.

There are two forms of pinene: alpha-pinene and beta-pinene. Alpha-pinene is also the most abundant terpenoid found in nature.

It is useful as an insect repellent because insects dislike its aroma.

Many plant essential oils that contain pinene have been shown to reduce inflammation. Alpha-pinene exhibits a number of anti-inflammatory properties in animal cells. One American study concluded that the terpene is “a potential candidate as a new drug to treat various inflammatory diseases”. Interestingly,   terpene could also be an effective additive to sunscreen, because it prevents skin damage caused by ultraviolet light.

Many studies in animals have concluded that both alpha- and beta-pinene have significant anti-tumor properties. In fact, when consumed together, both forms of pinene appear to have synergistic effects in reducing tumors.

Alpha-pinene and beta-pinene have also been studied for their antimicrobial effects.

Beta – pinene appears to improve mood, acting much like an antidepressant might, without undesirable side effects. It also reduces anxiety.

One study published in a Swiss journal tested the ability of alpha- and beta-pinene to fight the infectious bronchitis virus. The study found that both types of pinene inhibited viral activity in cells, therefore making the terpene a potential aid for those with bronchitis. The study also established pinene as a bronchodilator that could offer relief to those with asthma. People who suffer from COPD or emphysema benefit from inhaling balsam, pine or cedar oil, although the effects are short lived and so it is necessary to use these substances on a regular basis. I use them daily during the winter months.

In an attempt to understand Alzheimer’s disease, scientists have investigated alpha-pinene’s role in fighting this incurable neurological disorder. Some scientists have concluded that alpha –pinene may also be beneficial when dealing with dementia, cognitive dysfunction and memory loss.

Bacterial pathogens have a great ability to acquire resistance against antibiotics; and gastroenteritis is a disease caused by a multidrug –resistant bacteria. Alpha pinene has been used to mitigate the effects of the bacteria.

Although it is clear that these terpenes have antimicrobial, anticancer, anti-inflammatory, and antiallergic properties and several in vivo, and more recently, a few clinical studies have assessed the pinenes biological effects, further efforts are needed to deepen knowledge in this field. As far as I was able to determine western science has barely scratched the surface of the benefits of these phytochemicals. Instead we rely on expensive drugs that have undesirable side effects.

Until I lived in the desert I took evergreens somewhat for granted because I have lived with these trees all my life, but it was only a few months after moving to NM before I began to miss the diversity and the scent. Fortunately, the Pedernal was only an hour’s drive from the casita so except during mid –winter I always had a place to go where I could once again bathe my body in these rich compounds I both craved and loved.