a hole in my heart.

this land with your presence

That I loved you

You are curled into

waiting to give birth.

If you are alive…

come back to me.

shimmering in the son.

that I am wed 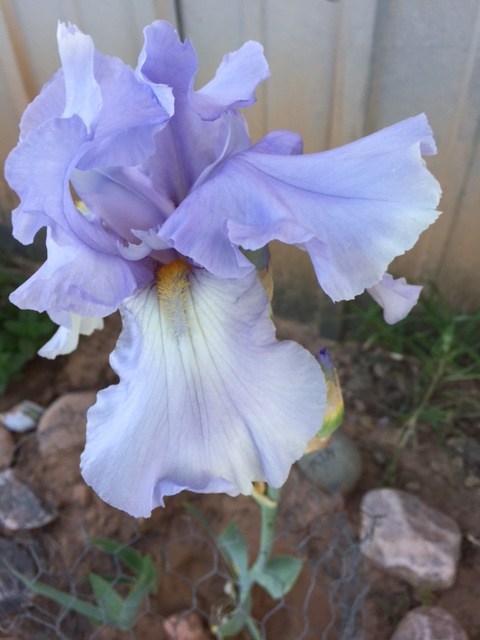 Rainbows luminesced in her wake.

Messenger from the clouds,

she gathered up the rain,

pouring it on dry cracked ground.

Early this morning when I went out to water my plants I experienced a moment of wonder. The single stalk and leaves that had grown out of a rabbit ravaged Iris rhizome that I had rescued, was unfurling its first bud. The unexpected sight of this large delicately fluted blue flower in the early morning light sparked a moment of pure joy as a hummingbird hovered over her … Bright orange Globe mallow is an astonishing wildflower that springs up without assistance and it covers my desert backyard making a delightful contrast of colors.

In Greek Mythology Iris was goddess of the rainbow and a messenger from the gods. She was also a goddess of sea and sky. Her father was a god of the sea. Her mother was a cloud nymph. For the coastal dwelling Greeks the rainbow arc spanned the distance between cloud and sea, and the virgin goddess (as in one unto herself having nothing to do with being celibate) Iris replenished the rain clouds with water from the sea.