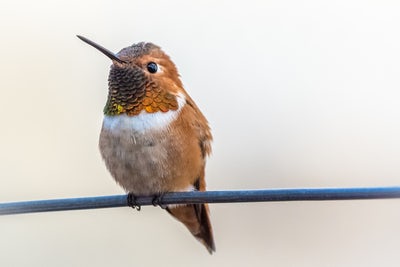 This morning I was aghast when Mr. Rufous hit the window and fell to the ground. Rushing out to give him sugar water, I was so relieved to see him recover his wits and fly towards his cottonwood bower on his own. A very close call.

Rufous, an iridescent coppery jewel of a hummingbird arrived here on June 22 with his mate – just as beautiful in her less dramatic emerald and rust attire. My other resident hummingbirds (black chin, and broadtail) all seemed to be cooperating as they visited my two feeders – both of which are emptied and refilled every day. I have so many! I wondered how Rufous and his wife would fit in so I have been keeping a sharp eye on hummingbird cooperation dynamics. Three weeks have gone by since their arrival, and I do believe this couple may stay to raise a family because they are still here and fly off in the same direction whenever leaving the feeders.

It is true that this pugnacious little hummingbird can throw a wrench into cooperation but I have been pleasantly surprised to see this male and female sipping nectar with other birds sitting on neighboring perches. Could it be that the broadtail and black chin social dynamic has rubbed off on Mr. and Mrs. Rufous? I have no way of knowing, but it does seem that this couple is more willing to compromise than most others I have known. Some days, of course Mr. Rufous hovers above the feeders making sudden aggressive dives to scare the others away with his high pitched squeaks – but only for a few moments. Often, he lets others return and I have pictures of their sharing quite companionably. Mrs. Rufous seems very cooperative and she has taken to visiting the nastursiums, scarlet runner beans, fiery salvia, deep rose and scarlet penstemon and the pot that holds my bee, butterfly, and hummingbird friendly wildflower mixture that Iren gave me last spring. This pot is an astonishing bouquet of deep pink, mauve, purple, and white flowers, with a few golden California poppies. I have become increasingly attached to these fiesty little hummingbirds.

It interests me that the territories that the male and female “defend” are somewhat different. Males hover over the primary food source(s) while the females extend their ranges further afield choosing less dense wildflower meadows. This year, except for my little pot garden there are few wildflowers beyond the fence where I do not water, so choices, at least here, are very limited. And Mrs. Rufous does not hog these flowers; the others sip from them too.

Rufous hummingbirds are small with a short tail with mighty flight skills that allow them to travel 2000 miles from Mexico to as far north as Alaska for breeding in the western states. This migration can take place from as early as May to August in New Mexico, and some stop along the way to raise their families. They follow the wildflower season. During their long migrations, they make a clockwise circuit of western North America each year moving up the Pacific Coast in late winter and spring, reaching Washington and British Columbia by May, Alaska by June. As early as July they may start south again, traveling down the chain of the Rocky Mountains.  Only recently have we learned that these hummingbirds follow a clockwise pattern of migration.

The adult male  rufous has a slender bill, white breast, a rusty face, flanks and tail with a startlingly beautiful orange-red throat patch or gorget. Some males have some green on back and/or crown (Mr Rufous does not). The female has green, white, some iridescent orange and a dark tail with white tips. The female is slightly larger than the male and has longer wings.

As many of us know, like all hummingbirds, these exquisite jewels feed on nectar from flowers using a long extendable tongue or capture insects on the wing. They require frequent feeding while active during the day and go into a state of torpor at night to conserve energy. Because of their small size, they are vulnerable to insect-eating birds and animals.

Most breeding habitats are open areas, mountainsides and forest edges in western North America and the Pacific Northwest. The female builds a nest made out of mosses, cattails, spider webs, in a tree shrub or tree and raises her brood of two chicks alone. The offspring are ready for flight in about three weeks.

Surveys show continuing declines in rufous numbers during recent decades. Because they rely on finding the right conditions in so many different habitats at just the right seasons during the year, these hummingbirds are especially vulnerable to the effects of climate change.

Hummingbirds in general are only found in the western hemisphere, so they do not appear in any culture’s legends and myths except those of North and South America. On the Pacific coast of Peru people carved into the desert surface what archaeologists call a “giant ground drawing” of a hummingbird.

The tiny iridescent “flower birds,” were considered gifts from the gods by Indigenous Peoples. In Peru and other South American countries, at or near the equator, naturalists have catalogued over three hundred species, and it is believed that not all have been discovered yet.

The rain forests of South America were probably where hummingbirds first evolved (co-evolved) with flowers. Perhaps hummingbirds drank the life-giving nectar, leaving behind a pollinated forest before flying away, its burnished colors shimmering in a primal world of sunlight…

Just the sight of these birds brings me into the present moment, one filled with joy.

Thanks be for hummingbirds!