saving native seeds that will endure 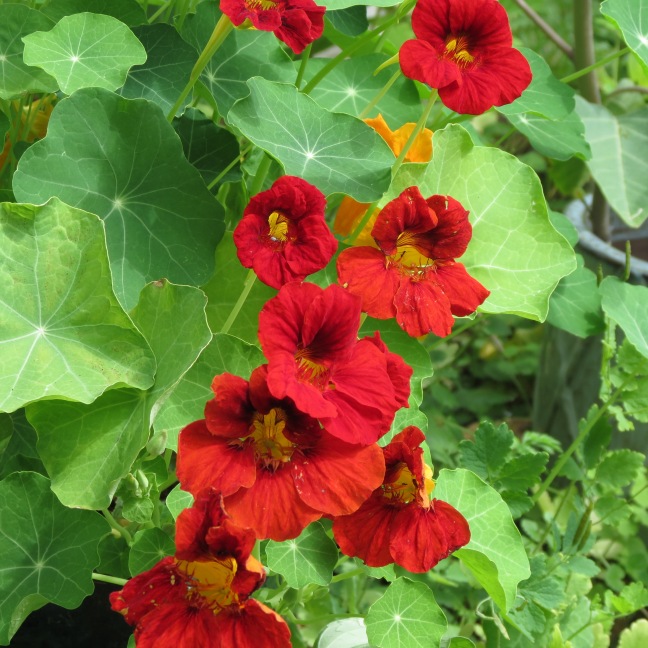 I first fell in love with the fiery red and gold trailing nasturtiums that grew in my grandmother’s garden when I was a small child. I believe it was my mother who first put the flowers in salads making each summer meal a festive event.

Both my mother and grandmother were gardeners so I grew up with plants indoors and out. I participated gathering all kinds of ripe seeds and pods including wrinkled bright green nasturtium seeds that looked to me like tiny human brains that shrunk to half their size as they dried on screens in my grandmother’s attic. Later the seeds were stored in paper bags until spring.

The awe that I experienced touching any seed as a child is still with me. That each one carries its own story, its own DNA (protein) signature, and the form the seed will take, is a miracle worth reflecting upon.

The first flowers I ever planted were nasturtiums that came from my grandmother’s garden. I prepared little rock crevices that lay against a giant granite boulder on Monhegan Island, my first adult home in Maine. Located 16 miles out to sea, this tiny fishing village was flooded by tourists in the summer. When people walked up from the wharf passing by my house, they often casually plucked the flowers I cared for so tenderly. Putting up a sign made no difference and I was too young to feel tolerance for these interlopers, eventually moving my precious nasturtium patch to another garden behind the house!

Although I used the leaves in salads I had a hard time picking the flowers, preferring instead to enjoy the feast by sight.

As soon as my two boys were old enough, each summer they bit off the fragrant flames, even as a multitude of bees and hummingbirds vied for sweet nasturtium nectar. Sometimes, when childhood friends came over, my sons would pick and eat a nasturtium creating quite a stir. Other children were amazed. No one ate flowers!

My children are long ago grown and gone and I am still planting nasturtiums some fifty years later.

Last year, I planted the few seeds that I had brought with me from Maine, here in Abiquiu. I also ordered some from a familiar catalog that specializes in organic and heirloom seeds. I grew my own in a large pot, and planted the others directly into the ground on the east side of the house. The nasturtiums in the pot had yellowing leaves and yet the seeds from both were equally abundant.

However, the nasturtiums I planted in the ground held more moisture after watering, providing my house lizards with giant green leaves that both lizards and buds thrived under during the monstrous July heat. When the vines finally began to trail in early August the plants were festooned with a riot of color, much to my joy and delight. Nasturtiums were still blooming well into November.

To this day, I rarely break off and eat a newly blooming flower as sweet as they are to the taste, although I regularly use the pungent peppery leaves in salads.

Saving seeds from year to year was simply part of what I did without thinking about it until I began to write and celebrate my own rituals (almost 40 years ago now). After making that shift I incorporated nasturtium seed gathering as part of my fall equinox thanksgiving celebration. Every year I invoke both my mother and my grandmother in remembrance and gratitude for their legacy – a long and unbroken line of growing these flowers and saving their seeds. Someday, I hope to find someone who will carry on my nasturtium seed story after I am gone.

Both the leaves and petals of nasturtiums are packed with nutrition, containing high levels of vitamin C. Ingesting these plants provides immune system support, tackles sore throats, coughs, and colds, as well as bacterial and fungal infections.

Studies have shown that the leaves have antibiotic properties; they are the most effective before flowering.

Nasturtiums are native to South America; they are not an imported species, perhaps lending credibility to the importance of sticking to native plants during this time of Earth’s most difficult transition. They are also known as a companion plant. For example, nasturtiums grow well with tomato plants. In addition, they act as a natural bug repellent so I always have small patches of them growing around my vegetable garden. Aphids are especially attracted to them leaving more vulnerable plants alone. Rabbits and other creatures aren’t tempted to eat their leaves or flowers because of their sharp flavor, yet these trailing vines attract many pollinators. Bees of all kinds and hummingbords love them. Although nasturtiums are frost sensitive, I note that even after germination the little green shoots with hats simply hug the ground if the weather turns inclement. Unless the temperature dips below the mid 20’s nasturtiums always bounce back. In fact even a hard frost won’t take all the adult plants at once because their vining habit protects some of the seeds and some flowers. I always end up pulling the vines and the very last flowers before all are withered (this is when I consume the flowers after picking a small bouquet for the house). For all the above reasons I think these tough and tender vining plants have a good chance of surviving in the face of Climate Change.

Postscript:  I am so pleased to announce that this little story along with many others is going to part of the SEEDBROADCAST exhibit focused on Climate Change and Seed Resilience at the Albuquerque Museum in New Mexico.

This exhibition is presented by SeedBroadCast, a collaborative project exploring bioregional agri-Culture and seed action through collective inquiries and hands-on creative practices. SeedBroadCast holds the belief that it is a human right to save seeds and share their gifts, to grow food and share its abundance, and to cultivate grassroots wisdom and share its creativity. These are the roots of agri-Culture to be broadcast.

SeedBroadCast presents an exhibition at the Albuquerque Museum that will inspire dialogue around global warming, local food, healthy communities, and the revitalization of bioregional indigenous agri-Cultural practices. This exhibition will feature an interactive installation including a series of collage prints, audio soundscape, video, a sculptural installation of Seed Stories, a creative reading and exchange station, and a special edition of the SeedBroadCast agri-Culture Journal.

The exhibition will include performance events and gatherings with community partners to cultivate and broadcast seed resiliency.

In 2016-17, SeedBroadCast partnered with Native Seeds/SEARCH and Northern New Mexico indigenous seed savers, acequia farmers, urban-indigenous permaculturists, and youth to creatively explore Seed Resilience in the face of Climate Change. We began this project in 2016 with funding from Robert Rauschenberg Foundation Climate Change Solutions Fund and have since continued this important work with the support from many other organizations and individuals.

During the initial process, we followed four farm projects over the course of an entire year, from spring through summer and autumn harvest. Over these seasons, we interviewed these farmers and community members and used photography and audio interviews to record a multimedia timeline of seasonal happenings: from seeds, to cultivating, planting, tending, drought, locusts, hail, labor, struggle, harvest, and community.

SeedBroadCast encourages communities to keep local agri-Culture alive and vibrant through working together in creative and inspiring ways. Spending time with people on their farms, in their gardens, at seed exchanges, and at community gatherings, SeedBroadCast digs deep into the oft-unheard stories of local agri-Culture producing community based projects, art installations, dialogues, and creative actions. Interdisciplinary collaboration is a founding principal of SeedBroadCast activities where cohorts from diverse backgrounds work together as critical partners of inquiry and creative production.