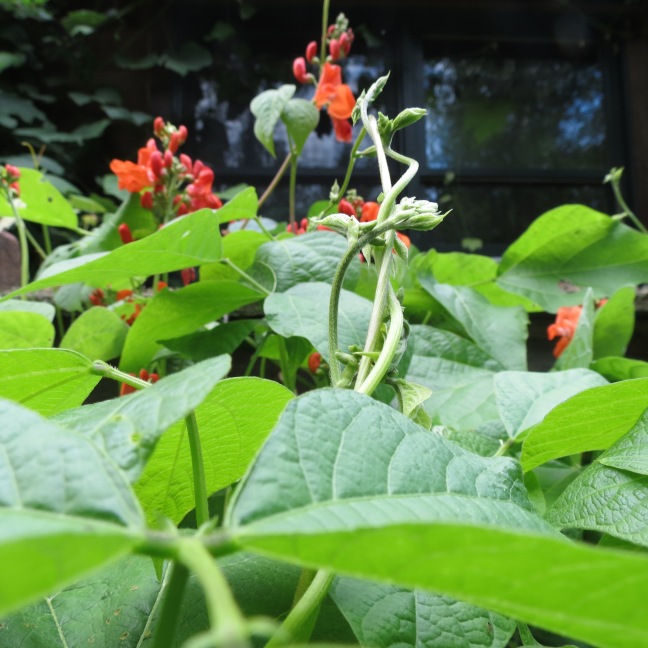 (Phaseolus coccineus) – photo from my garden

About 30 years ago I was visiting a neighbor for the first time early one August when I spied the most extraordinary vine of brilliant orange pea sized flowers cascading from an emerald climber that stretched across the entire wire wall of a huge vegetable garden. Eileen left an eight foot arch open by tying back some of the vines for an entrance. The vines were massive, at least 12 to 15 feet high and at least 100 feet long, and I could see and hear the sound of joyful ruby throated hummingbirds as they buzzed from one blossom to another as millions of bees, swallowtails, and monarchs swooped through the air lighting upon loose tendrils that were attempting to find purchase somewhere by climbing on the backs of their neighbors. To say I was transfixed by the sight is an understatement. I lost time in the blue and gold mountain field in Western Maine as I stood there astonished and bewildered by such abundance and beauty.

Returning to ordinary time, and gathering my wits about me, I asked my new friend about the vine and was only then I was formerly introduced to the magnificent Scarlet Runner bean. As we wandered down the fence line Eileen told me that she had grown up in the south and had been surrounded by these vines since she was a child; she was then a woman in her late sixties. As we peeked into the plethora of leaves I was delighted to see small green beans developing from the flowers and was told that these beans were delicious to eat, especially when picked while still young. I had been a gardener all my life – how had I missed learning about such a plant?

By the time I left Eileen’s house that afternoon I had a whole handful of shiny deep mauve and black kidney shaped beans in my hand for next year’s planting. These were heirloom seeds that Eileen had been given by her own mother. I was ecstatic.

This was the beginning of my love affair with Scarlet Runner beans, an affair that continues into the present. The first year I grew them they took over the entire back porch. I soon learned to plant even more vines like Eileen had so the deer could feast on the bounty too.

One spring a black bear watched me place my seeds into rich loam from behind his spindly screen of bushes, and that very night Little Bee came back and dug up every bean that I had planted (An endless curiosity is a fundamental aspect of friendly backyard bears)!

As the years passed my own wild unkempt garden was covered in more and more Scarlet Runner vines, flowers, and beans. I discovered to my surprise that black bears also loved to eat the blossoms and seed pods. Even with all the competition, I had plenty of fresh green beans and took endless joy out of watching so many bees, butterflies, bears, deer, and hummingbirds feast along with me.

About ten years ago when colony collapse devastated the honey bee population the bumblebees took over, but I couldn’t help noticing that overall there were less and less bees and butterflies drinking sweet nectar. Diminishment of various species is invisible to some. Only during the last two summers I spent in Maine did I have fewer hummingbirds…

Every year after the harvest I gathered and gave away seed gems to friends who seemed to appreciate them as much as I did – passing on the priceless gift of un contaminated heirloom seeds – seeds that held a future free of human manipulation within each be- jeweled skin.

When I moved to New Mexico I brought a few beans with me and my friend Iren was the first recipient of this precious bounty. She, in turn, passed some seeds onto others. Last summer her entire back fence was covered in gorgeous plants. Here in New Mexico the vines don’t grow quite as tall but they are still abundant, and during July deer and elk ate some of Iren’s blossoms (but there were plenty left for her to harvest).

Here, I planted my beans in a pot above ground. I do not recommend this practice. These beans need ample water and need to be planted in the Earth to thrive (mine had yellowing leaves). I also noted the effect the intense heat had on the beans. The plants didn’t start producing beans until August though we planted in mid – May, I believe. It’s important to know that Scarlet Runners will not survive frost. What I did notice is that butterflies (swallowtails) and a number of different bees flocked to the flowers. Hummingbirds loved them!

Imagine my shock when I discovered that the history of Scarlet Runner beans began in North America. These beans are native to the highlands of Mexico, Costa Rica, El Salvador, Guatemala, Honduras, and Nicaragua, where they have been cultivated for thousands of years.

This climbing plant is one of the oldest documented beans known to humans!

Native Americans consumed almost every part of the plant including the starchy root. Some Indigenous tribes regard the Scarlet Runner bean as a sacred plant. The plants seem to pulse with the life force, at least for me.

Today, Scarlet Runner beans are usually grown as annuals for the obvious reasons – their showy flowers and their edible pods and seeds. I recently learned that they are unusual among bean species because they are perennial in places where the ground doesn’t freeze and they climb in a clockwise direction. In retrospect I wondered if they were grown as perennials in the south where Eileen once lived.

I remember Iren asking me if you could cook the dried beans. My friend Eileen had never mentioned the practice so I didn’t know until I did this research that here in the U.S. consumers, up until recently, were more likely to find the shelled dried beans to cook than seeds to plant! Mature dried Scarlet Runner beans are ¾ inch in length. They can be cooked like Pinto or Pink beans and used in dishes such as soups and stews. Scarlet Runner beans are less starchy than Lima beans with a nutty garden-fresh flavor. These beans are also known by the common names of Scarlet Conqueror, Fire beans, Mammoth beans, Red Giant beans, and Scarlet Emperor beans.

Today, of course there are many cultivars to choose from but I prefer the lineage I have because I know those seeds originated at a time that preceded spraying etc.; they also have sentimental value. If anyone is interested in the gift of a few seeds please contact me at Sara@megalink.net.

With that much said so much is happening with seed savers across the country that it is now possible to buy heirloom seeds from a number of companies. This year when I attend the Tewa Women’s Seed Exchange I plan to bring some of my Scarlet Runner beans from last year’s harvest. My guess is that Iren will do the same! 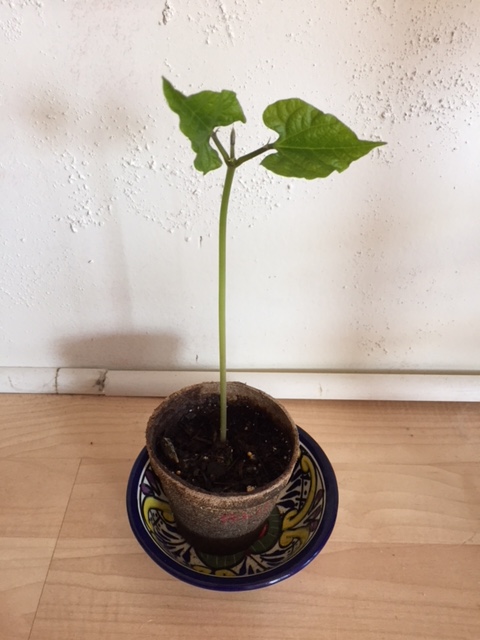 over in my palm

I recall that each embodies

the Mystery of Becoming –

through genetics, pattern and form.

each seed in her pot

that will split the air in two.

with the air she breathes.

Because of her we live.

Vining up the gnarled trellis

She spirals her way to sky.

Sweet nectar is their treat.

After a spray of orange blooms

I watch for slender

I always add a prayer.

some a foot or more in length.

I cut them away from

Excitedly I open the first one

to greet next year’s gift,

Oh, the miracle of new life to come.