The Desert is blessed by rain 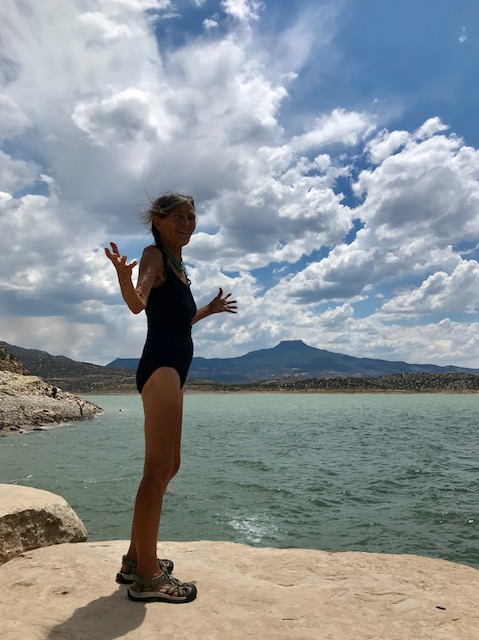 I am a woman who is in love with the Water and Sky!

This photo was taken a few days ago when Iren and I went to the lake to swim – it captures the joy of the moment.

Last night we had real rain – the kind that soaks the desert ground and brings even the most withered plants to life.

Here in Northern New Mexico we are suffering a terrible drought that has chilling implications for the future. Living by the river under the cottonwoods I am spared the  visual reality of drought, although it is impossible to ignore the dry cracked earth beneath my feet, or the scarcity of wildflowers.

The light rain we had yesterday morning wasn’t enough to keep me from watering thirsty seedlings and plants… but the birds were taking baths on the wire fence and I had a flock of western bluebirds, phoebes, flycatchers and towhees that all participated. The first fiesty Rufous hummingbird appeared at my feeder.

Last night, as if in anticipation of heavier rains the great horned owl hooted just outside my window at dusk – twice. The nighthawk identified himself  by his high pitched peet.

When the skies opened last night it seemed like a holy thing. This morning on my walk to the river mist rose off the water obscuring the mesas.

The thick gray cloud cover keeps the scorching solstice sun at bay, and all my windows are open allowing inside and outside to become parts of one whole.

Unlike so many this time of year is my least favorite because of the heat of the sun, so to have two mornings of reprieve seems like the greatest of blessings and my gratitude overflows…