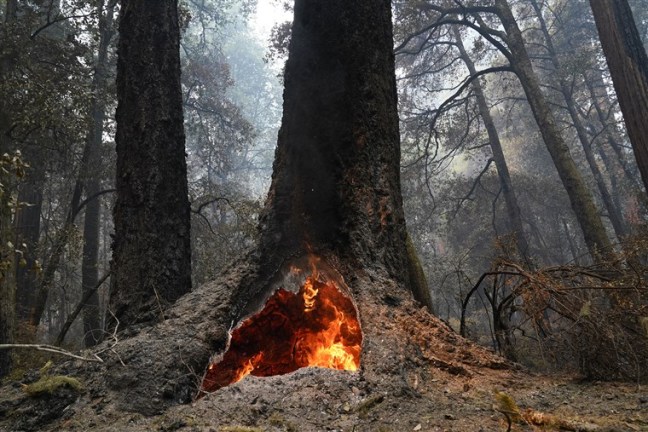 The Earth is on Fire.

the lack of fruiting bodies

that grief must be

felt with as much

The Earth is on Fire.

Yet some will live on.

There is nothing they

can do to stop

the Grief of the Earth,

to the power of

Working notes:  From the personal to the collective

A few days ago I had to take down a pine tree that I loved. Although I did not do the actual cutting I did make the decision to end the tree’s life, so I am the one responsible. My young friend made the cut, felling the tree in just the right direction; his father who was assisting felt a fierce wind hit his face as the tree slammed into the ground just beside him. Indoors, I shuddered involuntarily even as relief flowed through me like a river. It was over.

This tree cutting was witnessed by “tree people” – three humans who truly love trees. Afterwards, Marcus came to me. “Are you all right?” I choked back an avalanche of tears. Not (at that moment) for the tree, but for me because, like the tree, I too had just been witnessed by this boy’s sensitivity – For the first time in my 75 years I was not alone with my tree grief. No other words passed between the three of us but the depth of our feelings united us with each other and that tree. Not a shred of separation between us. Amazing, and yet so comprehensible.

I felt sorrow over the loss of the tree; but also, strangely, accepting. The next morning I wrote the following about a dream I had and began a tree tale not realizing that we three – father, son and I were still sharing a field. I was not yet alone.

In the dream a giant tree comes down – it has just been cut. I thought the whole tree was alive – but I am surprised to see that half of the tree is already quite dead. I see its gray whale -like body lying supine without its skin. It looked like a piece of driftwood lying on the ground.

The night before this event I poured water at the base of the tree as a blessing, gathered herbs to place against her trunk. I lay my hands on rough bark as I spoke … reminiscing about the bear fur I first found scattered around her pine-rooted floor. I told the tree how much I loved the sound of her needles rustling, the intoxicating scent of those that fell to the ground, the “candles” s/he bore in late spring, the masses of pine cones that appeared shortly thereafter. How kindly s/he blocked the heat of the summer sun from the house; how much I loved her. I told her too that I hoped that she would not feel too much pain. I listened then for a response and sensed a stillness; this tree knew what was coming and accepted her dying. There was no answer forthcoming regarding pain… This tree also had a sister/brother tree that would be left standing alone. (I called this marked tree a female but all white pines are monoecious meaning that each tree produces male and female cones).

That was as far as I got.

An email came in from Marcus a few minutes later that addressed my question: did he feel that trees experienced pain?

What follows is his response.

“In my experience, I have found that trees certainly do feel pain. The difficulty is in understanding it because the pain the trees feel is only knowable at a visceral level in our bodies. The pain in my body is the tree ‘s pain. The tough part is that because that pain is in my body, it gets mixed up with my own feelings of loss, which makes it immensely challenging to sort through. However, a few weeks ago when I had to cut down an apple tree that was being destroyed by tent caterpillars the separation of this pain was discernable. Once the tree was gone there was an immense release of pain in my body. But even so I still carried the sadness of the tree’s loss…I spent so much time getting to know that apple tree that I could feel it drowning in its own sap because it could no longer photosynthesize. Yesterday was different. I could feel the tree and the split but couldn’t communicate with it as well…I was so nervous and stuck in my own place (we were all nervous – the tree was 167 feet tall). But what I know for certain is that trees accept death much easier than we do… the dying hurts physically but the trees are never scared of death or regretful at what is being left behind. They are much more in touch with the fluidity of their spirituality and with the cyclic nature of life. They understand that death is not an endpoint… Dead trees that have stumps continue to live as they transfer what I think of as their essence, meaning soul, spirit, consciousness to whatever comes next. It is only when the underground network for transference is ripped away that a tree really dies.”

I should add that Marcus is a nature mystic, though he doesn’t yet know it. A scholarship to Dartmouth left him feeling as if he didn’t belong and after a year he dropped out. Now he cares for his family’s forest, cuts trees when needed, creates magnificent art from dead trees and trains for the Olympics. He is 21 years old.

It stuns me that someone who is 50 years younger than I am could be such a powerful teacher, friend, and the first person I have ever known that feels the way I do about trees and can communicate these ideas/feelings on such an embodied level. I adore him.

The following day I learned firsthand about the terrible fires that are ravaging Colorado after talking with a woman who cannot even leave her own house (I have deliberately been avoiding the news).

That night I had a catastrophic dream rife with cultural holocaust elements. On a personal level I was about to go under…

When I awakened that morning I was so sluggish I could barely move. I dragged myself outside and stood quietly by the tree soaking in her dying scent. Pinenes. Tears were seeping into the heartwood from the still living cambium. I thought of the billions of burning,  slaughtered trees. I felt helpless and quite stupid. Profoundly depressed, I knew enough to stay with the grief as I moved through the day; the trees had taught me well. My body felt like lead. I fell asleep in the early afternoon.

The next morning I awakened refreshed; the collective grief had receded because I felt it and didn’t try to hurry it or twist my experience into some bizarre form blurring its painful edges with new age ‘gratitude,’ the most common cultural form of denial used by people to avoid dealing with anguish. I paved my own way to peace and illumination on a personal level by being with others who truly loved trees and allowed themselves to feel their grief as I did. In this process a gift was also given to a dying tree.

It interests me that as a ‘tree woman’ that I was still called to feel catastrophic tree grief on a collective level. By avoiding the news (because of Trump) I was also lacking in awareness and knowledge. Our Earth is on Fire, trees are dying by the billions, and these beings need to be witnessed, especially by those who are capable of standing it (so many are not and I think this is part of the problem). It was only after moving through this process a second time around that I could come into a state of peace. Blind acceptance of the death of billions of trees seems out of place in this context. Resignation is not an endpoint. The trees will guide me into whatever comes next. Of this, I am certain.