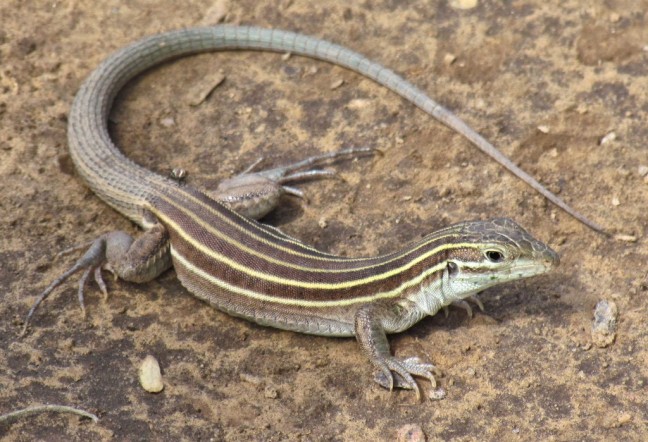 Every morning when I go out to water my potted plants and the remnant’s of the chamisa bushes that were sacrificed during the process of building I meet the lizards. I have two kinds – sagebrush lizards and the desert grassland whiptails. Both of these reptiles appear to enjoy my company as much as I enjoy theirs, or perhaps they are just waiting for the water to start flowing.

This morning when I planted a few coyote gourd seeds in a hole that I had recently dug, a whiptail lizard emerged like magic from somewhere under the house delicately positioning himself at the edge of the water logged hole for a drink. In the early morning light his stripes shimmered in the sun. The annoying thing is that I never have a camera with me to capture these morning antics, but I look forward with anticipation to seeing these lizards scurrying about every single day.

Desert grassland whiptails are very long and slim, with a thin tail that is longer than their body length. The most distinct identifying feature of these lizards are the six yellow lines – some very bright – that run the length of their bodies. The remainder of their bodies tend to be olive or brown with tails that are faded blue or gray. Curiously, an adolescent’s tail is a very bright and vibrant blue so I am always on the look out for the young ones. Whiptail bodies are lined with small coarse scales, which gradually get larger towards their tails. The scales on their bellies are larger and smoother.

Desert grassland whiptails are found in the deserts of southern to central Arizona and along the Rio Grande River in New Mexico. They are also found in the deserts of northern Mexico. A. uniparens is commonly found in low valleys, grasslands, and slight slopes. Some have argued that the species’ range is expanding due to overgrazing. They are scarce in developed areas, especially where homeowners keep livestock.

One amazing fact is that all desert grassland whiptail lizards are female! Strangely, researchers note that a kind of pseudo-copulation occurs which promotes fertilization during ovulation. The lizards reproduce by parthenogenesis, but offspring do not necessarily have the same chromosomes as their mother. This is because the lizards start off with twice the amount of chromosomes as would be found in sexually reproducing individuals. Diversity is maintained by combining sister chromatids which have the same origin but different functions.

Whiptails eat spiders, termites, ants of all kinds, beetles, and short-horned grasshoppers. These food habits make them very appealing to gardeners like me who don’t use any toxic chemicals to prevent insect infestations of any kind. Whiptails are constantly in motion! They often run upright on their hind legs, giving them the appearance of miniature dinosaurs! They also swivel their heads frequently from side to side, taste the air with slender forked tongues, and use their pointed snouts to probe the ground as they forage.

Their speed, and agility help them outmaneuver predators such as thrashers, roadrunners and snakes. One of my Chihuahuas, Lucy, is fascinated by them and always tries to chase them into the cottonwood leaves! Did you know that these lizards can sprint up to fifteen miles per hour (as fast as a roadrunner)? Whiptail lizards can also escape capture by sacrificing their tails (when grasped, their tail breaks easily along a fracture plane in the vertebrae). The disembodied tail wriggles violently, which startles and distracts the predator while the lizard dashes to safety.

Whiptails are wily creatures, beautiful to look at, and fun to watch. They do seem to enjoy scurrying around my feet as I water. I always talk to them, and when I do they watch me and listen with apparent curiosity. In my opinion, paying close attention to these little characters will bring joy into your day!