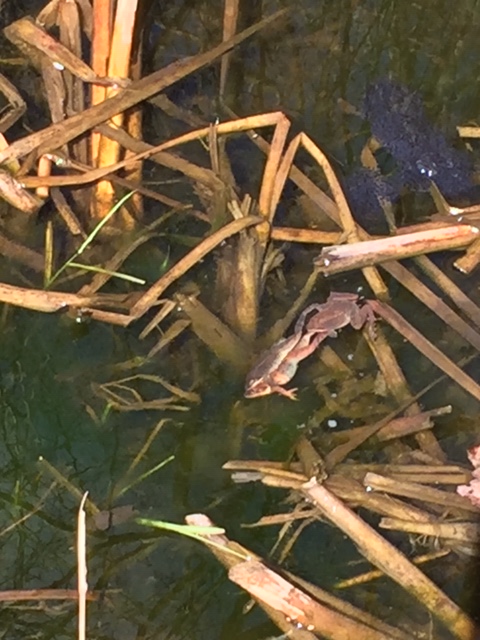 (Frogs mating – note the one who didn’t make it! Eggs in upper right) 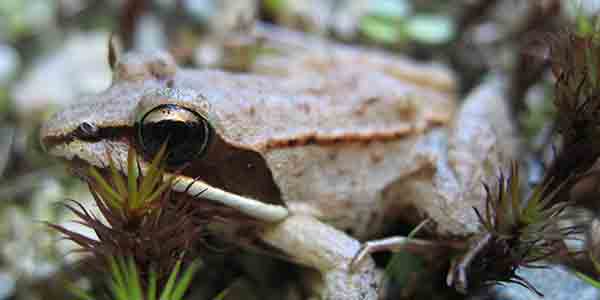 (Look at those golden eyes!)

The most exciting part of arriving home in early April is that signs of spring are everywhere. This is truly the season of new beginnings. I listened for the croaking quacking wood frogs at every ditch, puddle and vernal pool and was rewarded by one croaking male wood frog on April 12th.

Two days later in the same place I discovered one couple mating and laying; a few clumps of jellied eggs were scattered close to the frogs who were still clasped together. The frogs vanished the next day. I realized then that in this place there should have been many couples, not just one…All frogs and toads are the most threatened species on earth, our canaries in the coal mine. They absorb pollutants through their skin – human induced poisoned air, earth, and water. We are currently in the process of losing the species for good.

I happily scooped up the newly laid eggs to bring home to scatter in various vernal pools on this property where the have a better chance of surviving, grateful that I had not missed wood frog emergence. Normally they begin to croak before ice –out in late February March (March around here). So I am a bit puzzled by their current behavior.

Wood frogs are native to our Boreal forests in Alaska, Canada, and throughout the Northeast. Wood frogs are the only frogs that live north of the Arctic Circle.

Wood frogs are omnivorous, and eat a variety of small, forest-floor invertebrates. Adults consume a variety of insects including spiders, beetles and moth larvae. The tadpoles feed on plant detritus, algae (they also like lettuce) and also eat the eggs and larvae of other amphibians.

Similar to other northern frogs that enter dormancy close to the surface in soil and/or leaf litter, wood frogs can tolerate the freezing of their blood and other tissues. Urea accumulates in tissues in preparation for over wintering and liver fluid is converted in large quantities to sugars in response to ice formation. Both act to limit the amount of ice that forms and reduces osmotic shrinking of cells.

Amazingly, these creatures can survive many freeze/thaw events during winter if no more than about 65% of their total body water freezes.

After wood frogs emerge from hibernation they begin a yearly migration to the nearest vernal pool for breeding, starting in late February or March. This species is often described as an explosive, short-term breeder which means that the window for survival is minimal. In this region, breeding often takes place over just a few days. Males search for a mate by hugging other frogs until they find one who is round enough to be carrying eggs. Females lay approximately 1500 – 3000 eggs, often in the deeper sections of the pools. Out of the large amount of eggs deposited only about 4 percent survive. The egg mass retains heat, and those eggs located near the center of the mass have a higher survival rate.

Communal egg masses are sometimes attached to vegetation within pools. The ones I have found in ditches are free floating. Eggs will hatch in 4 to 30 days. Temperature is a factor. Around here the eggs I have hatched have become tadpoles in 2 -4 days.

In four to sixteen weeks, depending on water and food supply, wood frogs have completed their growth cycle. My tadpoles become frogs during the month of July. Maturity may be reached in one to two years, depending on the sex and the population of frogs. A wood frog’s lifespan in the wild is usually no more than three years.

In my eyes the glorious sight of a wood frog (now very rare) is cause for celebration. I used to see a few each summer, but no more. They are found in deciduous, coniferous, and mixed forests; marshes; meadows; and swamps. Most of the time the frog lives close to the ground, hiding under leaves in woodland areas.

A wood frog’s most distinct characteristic is the black marking across its eyes, which has been said to resemble a mask. The bodies of wood frogs can be varying shades of brown, red, green, or gray, with females tending to be more brightly colored than males (note picture). These frog hues sound dull but each has an iridescent sheen. Adults can reach about three inches. The ones around here do not.

It seems to me that everyone loves to eat wood frogs from eggs through adulthood…Herons maneuver their way into my vernal pools for a snack even in the deep woods! My kingfishers love them. A variety of snakes eat adult wood frogs. These creatures fall prey to snapping turtles, raccoons, skunks coyotes, and foxes. Beetles, turtles and salamanders feast on eggs and tadpoles.

In the amphibian world, wood frogs may be the species best able to recognize their family. When many tadpoles are in the same place, siblings seek each other out and group together (my guess is that it is the only species that has been studied). My observations of all frogs confirm that the young like to be close to one another.

Wood frogs are found in deciduous, coniferous, and mixed forests; marshes; meadows; and swamps. They spends most of their time on the ground in woody areas except for during mating season when they are breeding.

I am anxiously awaiting the birth of these tadpoles hoping that my attempts to scatter the “Croakers” around my property will lengthen the time they remain on Earth.