Above: Photograph of Kiva site .

The first time I climbed up the rubbly rocky switch-back path to the ruins it was a beautiful blue and gold autumn day. The view of the river valley, the surrounding mountains with the Sangre de Christo range rising in the distance was absolutely stunning. The mesa is situated about 150 feet above the Chama river. I could see the outline of the dark brown buildings, the rocky remains of the Poshuouinge ruins stretching out in front of me. I sat down on a flat stone beside the path imagining what it must have been like to live here around 1375 CE when the pueblo was first built and inhabited by the ancestors of today’s Tewa speaking people. Apparently there were about 700 ground floor rooms, and some were three stories high. The pueblo had two main plazas and a large kiva near the center of the eastern courtyard. There were two springs nearby for water. I wondered if the women plastered the mud walls here like they did in neighboring Abiquiu.

The Pueblo Indians are one of the oldest cultures in the United States (perhaps the oldest). They are believed to be descendants of the Mogollon, Hohokam and Anasazi peoples with their history tracing back 7,000 -10,000 years. The Anasazi (“Ancient Ones”), believed to be ancestors of the modern Pueblo Indians, inhabited the Four Corners country of southern Utah, southwestern Colorado, northwestern New Mexico, and northern Arizona from about A.D. 200 to A.D. 1300, leaving a heavy accumulation of house remains and debris behind when most migrated to New Mexico.

Recent research has traced the Anasazi to the “archaic” peoples who practiced a wandering, hunting, and food-gathering life-style from about 6000 B.C. until some of them began to develop into the distinctive Anasazi culture in the last millennium BC. They built pueblos on tops of mesas or in hollowed out natural caves at the base of canyons. During the last two centuries BC, the people began to supplement their food gathering with growing maize. By 1200 CE subsistence farming was a way of life. They hunted, grew corn, squash, and beans, raised turkeys, and developed complex irrigation systems.

The Tewa are a linguistic group of Pueblo Indians who speak the Tewa language and share the same pueblo culture. The word Tewa means: village above the muddy river. Their homelands are near or on the Rio Grande and Chama rivers north of Santa Fe. Included in this group at present are the pueblos of Nambe, Tesuque, Pojoaque, San Ildefonso, Okay Owningeh (San Juan), and Santa Clara. Today, the once oral language of Tewa is being taught to children who are learning to read the language as well as to speak it.

The Tewa have a story about their origins. In the beginning they were one people. As they began their journey they divided themselves into two groups called the summer (squash) people and the winter (turquoise) people. They traveled along the banks of the two big rivers, the Rio Chama and the Rio Grande making many stops along the way, building a village at each location. When the people reunited they built one village together. It was called Posi- ounge, and this ruin is situated a few miles south from Poshuouinge along with a number of others some of which are now on private property…

Poshuouinge was one of the larger pueblos. About 1500 Indigenous peoples made their homes here for about 100 years before the pueblo was abandoned. The Tewa people of Poshuouinge were using terraced gardens. They grew maize, beans and squash and also hunted deer, elk, and rabbits and gathered pinion nuts, wild plants and roots. Oral histories tell us that an epidemic struck and the people were forced to leave. Climate change may have also been a factor that forced the people to abandon this and many other ancestral pueblos. Poshuouinge was definitely deserted before the European invasion began, as were many other pueblos in this area. Descendants of these people now live in Abiquiu, Santa Clara, San Ildefonso, and San Juan or Okay Owingeh.

The sense of peace that I experienced sitting on the rock that first afternoon called me back to the mesa a number of times. The last time I climbed the stony path was just before the winter solstice on a beautiful warm almost winter day. The sun was so low that it cast deep shadows on the hills and surrounding mountains. In the distance to the east, the Rockies were covered with snow. As always, the view was astonishing. Is this why I had missed the petroglyphs the first couple of times I walked up the steep hill beyond the ruins?

Above: Big Bird with hole below for offerings?

Above: Serpent attached to ?

When I first saw “Big Bird” I wondered what kind of bird the artist was thinking of when he pecked this petroglyph into the basalt rock. Was this a turkey? On the other side I saw another drawing. This one depicted a serpent swimming horizontally; the snake was connected to some kind of figure I couldn’t identify. I had seen this type of petroglyph before and its meaning continued to escape me. Serpents, however, appeared on most of the petroglyphs I had seen thus far and were associated with the element of water as well as with the underworld. On this same rock there was also a smooth area that was used as some kind of grinding/sharpening stone? Very curious. Another eagle-like bird petroglyph was pecked into the side of this same rock. As I gazed into the distance I imagined that this spot must have been a lookout because it was about half way up the steep hill and the ground was level around the rock. The Tewa, (who were peaceful people) feared the nomadic warrior tribes like the Comanche, Ute, and Apache and even the Navajo that raided these pueblos and often took Indians as slaves – particularly the children.

I had brought some blue cornmeal as an offering to “feed” the spirits who lived here. I left some on this rock that also had a strange looking hole bored into it. It suddenly occurred to me that these holes might be places to leave offering too. 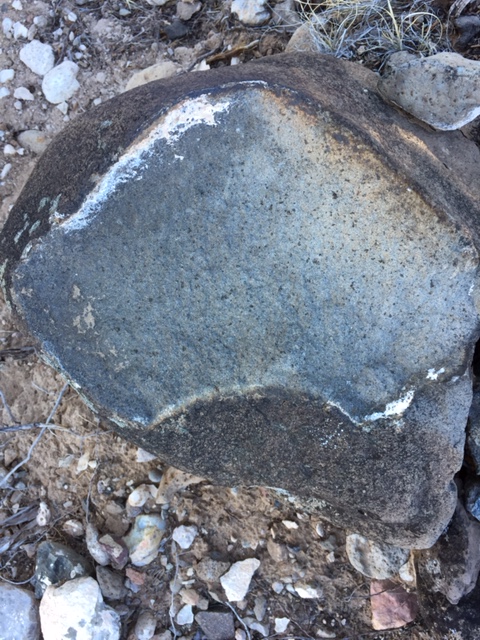 A bit further on I discovered a stone that must have once held a petroglyph that had been completely lifted off. I felt a sharp sense of grief. What part of the story has been lost as a result of this pillaging?

As I climbed to the summit the view claimed my attention once again. Whenever I came here I felt as if I could see forever… It seemed to me that these Pueblo peoples chose places that were stunningly beautiful for their homes in addition to being well suited for their protection. 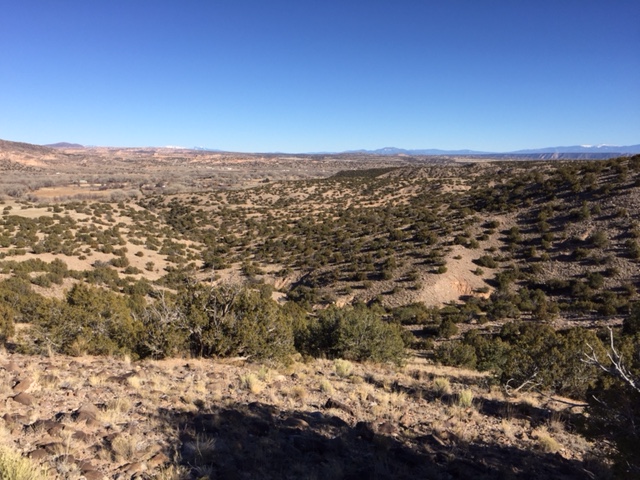 I wanted to follow the path further but it was getting cold. Ruefully I acknowledged that every time I came to this place time ceased to be…I wondered if the Ancestral Spirits of Place captured me in some indefinable way.

Retracing my steps I made a quick descent to the mesa. Unable to resist leaving the path, I wandered over to the ruins to look at the pottery shards scattered on the ground. I had already learned that the earliest pieces of pottery were those with designs – black on white. I picked up a piece of plain black pottery, and then one that was earth toned. There were a few shards of buff with red. Each piece was a different shape and I imagined putting the shards together to form a mosaic… 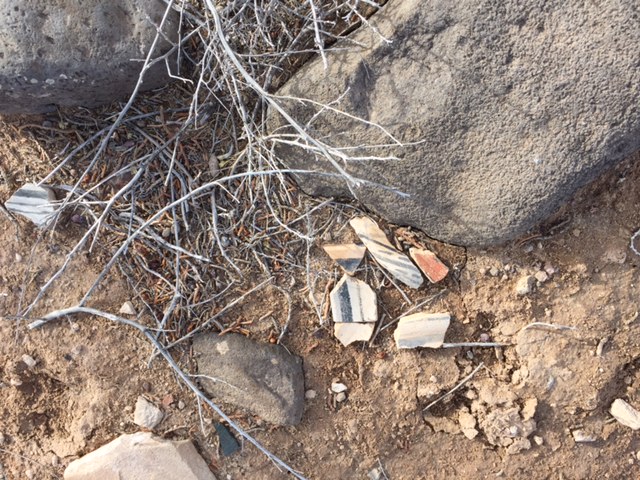 Putting down the gently curved clay pieces my eye caught a gleam of bitter orange. This stone I knew was chert, most often used for making arrowheads. There were many small chips gleaming in the late afternoon sun. I knew that the Tewa and their ancestors traveled to the Pedernal, the flat mountain on which (Navajo) Changing Woman had been born, to get this particular stone because it made the sharpest arrowheads. There were translucent smoky gray, black obsidian, and midnight blue chips as well as rusty orange flecks. I also found a few pieces of what I thought might be pipestone. Sadly, scattered throughout the ruins there were also deep holes that had been dug into the ground by thieves to find whole pots and other artifacts that were then sold illegally. 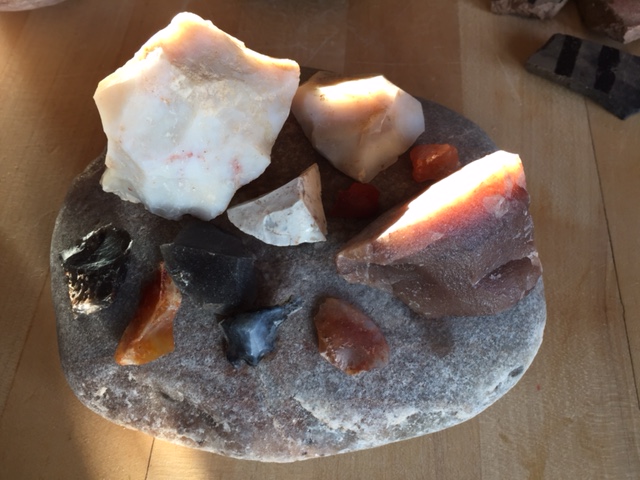 Meandering back to the path I passed junipers that wafted a sweet and pungent scent when I touched them. I reluctantly made my descent as the sun slipped below the horizon thanking the spirits of place for another timeless experience on this mesa that I had come to love.

The above photo was taken by my friend Iren Schio. Three concentric circles might represent the three worlds as understood by the Tewa. I still haven’t found this one!