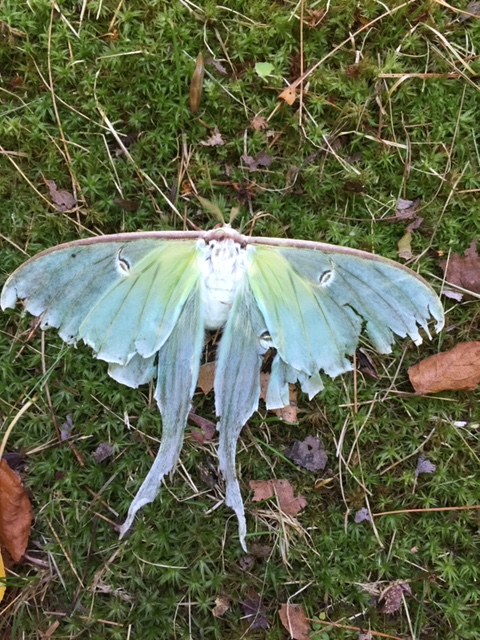 This morning when I took the dogs out around 6 AM I saw a beautiful Luna moth lying on emerald green moss covered ground. By the looks of its antenna I surmised this one was male because its ‘feathers’ were so long. In the past the sight of one of these deceased moths would have made me sad because I know that this moth in its present winged state is birthed without even a mouth to eat, and as soon as it mates it dies. But now I see Luna in a different light, as one whose time to die has come…Besides, I knew that the female that this male had mated with had laid eggs that would one day hatch…

When I bent down to pick up the pale green four inch wide insect with its double set of eyes, I noticed how torn and tattered its wings were, perhaps a result of a would be predator that discovered too late how unpleasant these moths can taste. Or perhaps it was just old age.

As defense mechanisms, larvae emit clicks as warnings. Surprisingly, they also regurgitate intestinal contents that have a deterrent effect on a variety of predators. The double sets of eyes on the lime green adult wings are believed to confuse predators as well. The elongated tails of the hind -wings are believed to jam echolocation used by predatory bats, although I hardly think bats are a problem around here. I am always amazed that insects have such sophisticated means of protecting themselves!

I brought the moth in the house to look at more closely wondering just where around here on the ground the larva had hatched into its adult form. Females lay 200–400 eggs, singly or in small groups, on the underside of leaves. Egg laying starts the evening after mating is completed and goes on for several days. Eggs hatch in about a week.

Each instar – the period between molts – generally takes about 4–10 days. There are five instars before cocooning occurs. At the end of each instar, a small amount of silk is placed on the major vein of a leaf and the larva molts leaving its green exoskeleton behind. After the final instar, larvae stay on the same tree where they hatched until it is time to descend to the ground to make a cocoon. At this point the caterpillar will spin its cocoon around a shriveled leaf that is lying on the ground. When females emerge from cocoons they fly to a tree, emit pheromones, and wait there for males to find them. Males can detect these molecules at a distance of several miles, flying in the direction the wind is coming from until reaching the female. Luna moth females mate with the first males to find them, a process that typically starts after midnight and takes several hours. The entire Luna Moth cycle usually occurs in the space of one year. In the North Country one generation of moths is produced.

Luna moths are what are known as giant silk moths – some have wingspans of seven inches. This moth was the first to be recorded in American insect literature. These most magnificent moths have a range that extends from Canada to Florida, and like every other insect this moth is succumbing to habitation loss, pesticides, logging, light pollution and other pressures associated with Climate Change.

There was a time when I used to see these moths each summer… I remember so well the year one fell out of the sky onto my head while I was standing on the porch of my camp… but these days, the sight of each one, living or dead, is a gift to be treasured and written about.

One thought on “Luna”